RecycleBank, a Philadelphia company that rewards people for recycling at home, has raised another $30 million in financing led by Silicon Valley venture firm Kleiner Perkins Caufield & Byers, according to VentureWire.

We first reported on RecycleBank last year, when it raised $13.1 million in a first round from RRE Ventures and Sigma Partners, which also invested in the latest round.

The company signs deals with waste disposal companies so that it can track the recycling habits of households — using technologies like radio frequency identification monitoring chips placed on bins and hauling trucks. Households in the company’s service areas are then given the opportunity to opt into the program. So far, RecycleBank boasts an average household adoption rate of between 80 and 90 percent in the communities where it operates. 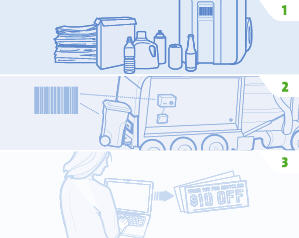 RecycleBank then signs partnerships with large retailers like Coke and Whole Foods, which provide discounts to consumers based on how many credits they’ve accumulated through their recycling habits. Companies like Coke benefit because they get access to the recycled goods, such as bottles, which they can then use in their own operations. Coke is, in fact, a strategic investor in the company.

RecycleBank says its revenues are already in the “millions” and that it will use the investment money to spread to larger municipalities from small ones it has already tried in New Jersey, Delaware and Pennsylvania. The company says it took the recycling rate in Wilmington, Del. from zero to 40 percent.