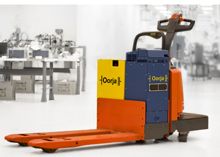 It’s been a while since we’ve heard from Oorja Protonics, a Sequoia Capital-backed Silicon Valley company developing an alcohol-based fuel cell technology for several years.

Today, Oorja is finally pulling off the wraps on its first application, a fuel cell for commercial and construction vehicles the company calls “ultra-powerful” in comparison to older technologies.

Oorja’s cell will power the electrical systems of vehicles like the pallet loaders used in large warehouses. The cells can be used in new vehicles, but also for retrofitting older vehicles.

It’s easy to see the benefit of using a fuel cell: Rather than having to stop operation to charge the cell, you just put in more of whatever fuels it — in Oorja’s case, methanol, which is a type of alcohol. Fuel cells burn their contents without moving parts like a combustion engine, giving them added reliability.

For the most part, though, the technology is unproven. Hydrogen fuel cells have been touted for their potential use in automobiles like Honda’s FCX, but you won’t see any hydrogen-powered cars on the roads anytime soon. Using an alcohol-based cell offers less power, but the fuel is much simpler to obtain.

Part of Oorja’s strategy is target the non-automotive vehicle market, because it’s hard to change buying habits and production standards the car market. If it can prove its technology in a low-level application, Oorja should be able to expand into other markets more easily later.

The company has taken just over $20 million to date from Sequoia Capital, DAG Ventures and Artis Capital. It’s based in Fremont, Calif.