Behind the online service Songkick is a simple motivation: To make going to a concert as easy as going to a movie.

Some 70 percent of U.S adults did not go to a concert last year, according to Songkick chief executive and co-founder Ian Hogarth, who I met in Austin, TX last week. Does that mean they don’t like music? No, you’d probably be hard-pressed to find someone who doesn’t like some form of music. Instead, Hogarth surmised that the reason people do not go to concerts is that it takes too much effort. One problem is that the bands you like probably only come to your city once a year — if you’re lucky.

In testing out the recommendations, the system works very well. My three bands led me to concerts of a couple other bands I already knew of and really enjoy as well, but hadn’t thought about in a while.

Another interesting feature is the ability to look at your computer’s music library (on iTunes, Winamp, or Windows Media Player) and build a recommended concert schedule from it. Hogarth noted that competitors such as the San Francisco-based SonicLiving require you to re-scan your music to update ticket listing. Songkick’s plugin auto-updates.

At its heart, Songkick is an aggregator of concert ticket information. It can be tedious to go to the various ticket sites (Ticketmaster, StubHub, etc) to try and search for bands’ shows that way. Songkick pulls all that information in and allows you to easily find which service is offering the best price for a show. The service aggregates tickets and prices from 16 different sellers across the United States and the UK.

Songkick also has a distributed ad network that it calls “Bandsense.” Bandsense works by being placed on music blogs, where it crawls the page looking for specific band mentions. In the advertisement area, relevant concert information is displayed that can be clicked on to purchase tickets. Songkick shares revenues from this with publishers.

‘Battle of the Bands‘ is another fun area of the site (currently in the Songkick Labs) that allows you to input three bands and see how popular they are on a chart similar to what Alexa does for websites. The results can be tweaked to show popularity based on Songkick rankings, MySpace friends, MySpace profile views, Amazon sales and a few other factors. 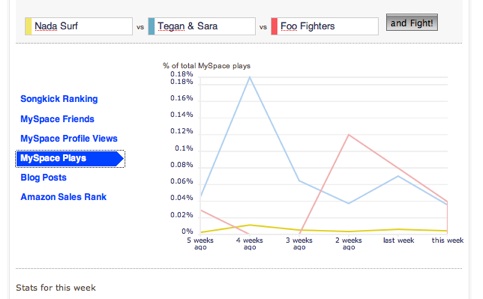 This new concert recommendation launch coincides with a new, undisclosed round of funding for the site. The company has accepted an angel round co-lead by Saul Klein, a founding partner of The Accelerator Group (TAG) based out of London, and Jeff Clavier, the founder and managing partner of Softech VC based in Silicon Valley. Other investors include Dan Porter of SVP Virgin (and the co-founder of Ticketweb — the first online ticketing site), Peter Read of Music Nation and Betaworks based in New York.

Songkick also expressed excitement about some new tie-ins with social networks that should be coming along shortly.

Having investors from both coasts of the United States as well as his home in London, England was important, Hogarth said, given all three areas are key for both music contribution and concerts themselves. Having Porter and Read on board as well as Saul Klein, who was a personal investor in Last.fm, the popular online music community, gives his company a stable foundation, Hogarth said.

Songkick was initially funded with a seed round in 2007 from Y Combinator (see our coverage on some of today’s applications from Spring 2008 Y Combinator Demo Day).

[Article title is in reference to this]