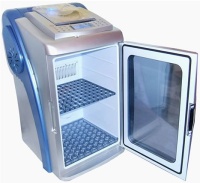 Thermoelectric materials allow the direct conversion of heat to electricity, or the movement of heat from one part of the material to another when electricity is applied. It’s a common and well-known concept, but not the one we typically use for cooling or heat conversion. Instead, various schemes involving pumping gas or liquid from hotter to cooler areas are generally preferred.

Those methods require moving parts and multiple steps, but so far, they’ve been cheaper to use than most applications of thermoelectric material. GMZ’s breakthrough, actually a technology licensed from the Massachusetts Institute of Technology, is the discovery of materials that can be cheaply manufactured and easily integrated into existing designs, and are also more efficient than other thermoelectric materials. That could both expand the existing thermoelectrics market, and put GMZ in a leading position within it.

GMZ is sticking to material manufacturing, so they’ll just sell the stuff for commercial use. Their initial product, which can withstand temperatures of about 250 Celsius (almost 400 Fahrenheit), will be used in household devices like refrigerators and air conditioners. It’s in the late stages of testing by manufacturers, and the company is gearing up to manufacture about 7 tons of it per year, enough for a few million devices.

Increasing the efficiency of your common household appliance is good, but what’s more exciting is the potential of GMZ’s materials that are still in their early testing stages. These later-stage materials can withstand higher temperatures, which means they could be used in cars.

One of the many factors holding down the fuel efficiency of today’s vehicles is the amount of energy they dump off as waste heat. A few clever placements of thermoelectric material can capture back up to about a fifth of that heat as electricity and cycle it back into the power system — a perfect application for hybrid vehicles.

Cars have long development cycles, so that’s a few years out. There are a number of other possibilities, though, like feedback systems for home furnaces and military uses. One place you probably won’t see GMZ’s material, according to CEO Mike Clary, is in utility-scale power plants; the heat levels are simply too high there.

GMZ is part of a growing trend toward investing in efficiency-based technologies (as opposed to generation, like solar power). For more on an opposite but similar technology to GMZ’s material, which turns electricity into heat more efficiently, check out our coverage of Thermoceramix.