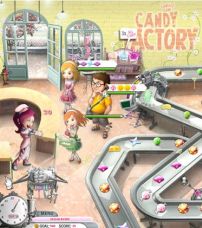 Facebook’s a great platform for hosting casual games, but it’s a pain to monetize — it’s just too new to be certain how to create a great business on top of it. Zynga and SGN want to create their own ad networks on Facebook, but I recently spoke to a more established company with a different idea.

Threewave Software is a development studio that has worked on mainstream blockbusters like Doom III, Return to Castle Wolfenstein and Turok. In 2005, it bought a small startup called Gnosis Games and began to fund the development of some smaller, casual games, which were then sold through retail channels.

Unlike the one-off casual games you’ll generally find on the internet, Gnosis makes theme packages like Candie’s Factory, which is billed as an action / puzzle game. The plan is to split off individual mini-games and place them on Facebook to gain brand recognition for the retail product.

“We’re trying to build up an audience on Facebook where you can develop the brand association, so when you see that same brand at retail, you’re already familiar with it,” says Threewave’s CEO, Dan Irish. “I think for this year, the retail proposition is still the most important.”

It’s easiest to think of the games as appetizers or hors d’oeuvres — having had a taste they enjoy, players may well want to pay for a full meal. When I ask Irish why other publishers aren’t doing the same thing, he says they don’t have the background to sell full retail games.

Threewave’s ideas do seem to be in line with Electronic Arts ‘ plans. EA has a stealth division called Blueprint that is reportedly creating “brand extensions” for its games to be distributed on social networks.

In a broad sense, both companies are planning to use Facebook as a marketing platform for their properties — which is actually somewhat similar to what Zynga does when it’s cross-promoting its own games through advertisements on its network.

For Threewave, the proposition even extends to testing out new concepts. While Candie’s Factory already exists, Gnosis will use Facebook as a place to vet games before it spends the time and money necessary to turn them into full products and sell them. Once the games are sold, they’ll remain connected; scores achieved in the full game will be reported back to the Facebook version, and vice versa.

Irish admits that he thinks the importance of retail sales will wane over the next five years, bringing advertising and micro-transactions within games to prominence; Threewave will also test those models while pushing its games. At the same time, Irish is also looking out for a coming roll-up of small developers. Soon, he says, “the top ten percent of developers will command 90 percent of the revenues.”