Flixwagon, a mobile live video casting platform, has just launched a “Flixee” widget that lets users stream video from a mobile phone to a blog, website, or social networking site. 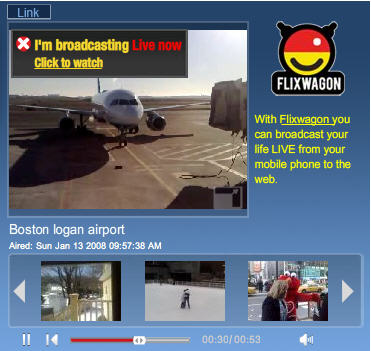 Additionally, Flixwagon users can deliver their mobile-to-web broadcasts directly to YouTube through their Flixwagon account, thanks to YouTube’s recently opened API. The widget and YouTube uploading add to the platform’s previous ability to video stream from a mobile phone directly to Flixwagon’s website.

The Tel Aviv-based company (previous coverage here ) is in stiff competition from Qik and Comvue, which both provide live video streaming from a mobile phone to the web.

The company seems to be successfully reaching out to a wider audience than just tech geeks, by partnering with MTV for “Choose or Lose,” which featured 23 citizen journalists who used an integrated version of Flixwagon’s mobile platform to cover the Super Tuesday primaries for MTV. It also has partnered with Sarah Meyers, a popular blogger from Pop17, to use the Flixee widget.
Flixwagon has been working for the past year and half to build its technology, with an emphasis on video quality and a highly scalable architecture that can support massive numbers of broadcasters and viewers, according to the company’s PR, which cites the Choose or Lose campaign as proof of the company’s ability to scale.

Still, the company will struggle to see serious uptake in the US, because of its limited availability: Flixwagon was recently only supporting higher-end Nokia and Sony Ericsson phones — phones with Symbian technology, and only now is available to all 3G phones. It still doesn’t support internet-enabled phones on J2ME, due to the differing nature of each phone’s operating system, said Chief Executive Hess.

Last time Venturebeat spoke with Hess, he mentioned Flixwagon was in talks with “a major VC” for its second round of funding, but so far there’s been no news of progress towards closing the round.