One-way GPS systems from the likes of Garmin, Mio Technology, Magellan, and TomTom and can only be so helpful to you. They can show you where to go, using satellite signals to fix your location as you drive. You can search the on-board memory of the devices for “points of interest” that you may want to visit, like the city hall in a town. Some of them even send you traffic conditions over a one-way radio for a fee of $5 a month or more. 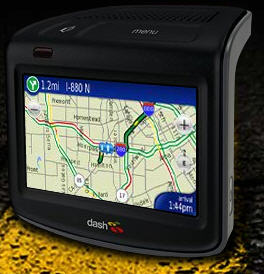 But Dash connects your gadget back to the company’s servers over cell phone (the nationwide GSM/GPRS network of Jasper Wireless) or Wi-Fi wireless Internet connections.

Dash uses “crowdsourcing,” where its own fleet of users communicates back their positions, speeds, and other data (including traffic reports from Inrix in Kirkland, Wash.) so that Dash can calculate traffic on both freeways and major side streets. This is a big advantage over other kinds of GPS navigation systems, and Dash recently decided to cut its price from $600 to $400. It goes on sale today at Amazon.com.

“There is an element of Web 2.0 meets GPS here,” said Mark Williamson, director of services for Dash. “Others get you from point to point. We can tell you what is around you.”

My colleague Matt isn’t so fond of the Dash Express, which I will acknowledge has some drawbacks. One of the problems is that it costs $12.99 a month to use some of the best features beyond GPS navigation. The question is whether users are going to care about all of the slight advantages that Dash has over other dumb GPS gadgets.

Makers of those other gadgets are trying to match Dash, which has had a long delay in getting to market. They come close to doing so, but not at the same cost. Magellan announced its Maestro Elite 5340+GPRS at the Consumer Electronics Show in January. It has features such as two-way Google search through a GPRS connection, but it costs a crazy $1,299.

Keep this in mind. Dash itself may not succeed, but GPS is going enter a brave new era. Intel’s top executives have been saying for some time now that “mobile Internet devices” are going to become a huge market, particularly for the upcoming low-power Intel “Silverthorne” and “Menlow” chips. And those Intel executives are saying that GPS devices with big screens and Internet connectivity – something that Dash has – are going to be the vanguard of the new devices. Right now, the Dash device and others use ARM9 processors, but the Intel chips will put a full computer in your GPS unit. And the two-way connectivity will get better and more useful over time. 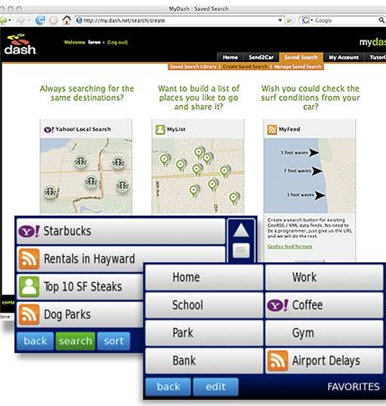 I liked using the Dash Express prototype and got a look at the final version recently. It has a 4.3-inch screen, two simple buttons on the top, easy-to-hit navigation menus, and color-coding that makes sense when you’re look at it during the day or night. The screen even has a sensor that brightens or darkens the display based on the available sunlight. It takes 30 seconds to get a navigation fix from a cold start but when it awakes from standby it can do so in five seconds, thanks to its SirfStar III chip which handles the satellite communication.

The best feature is a time clock that tells you the estimated time that you will arrive at your destination. This little feature on the lower side of the screen is there because Dash has both WiFi and GPRS connectivity. It syncs traffic information to the device so that your device can recalculate your arrival time in real time. I noticed that the time estimate changed when I sped up or hit a slow patch on the highway. Dash also uses this information to calculate several different routes to your destination; you can look at the traffic and then decide which way to go.

Another great feature is Yahoo! Local Search (too bad you don’t get a choice of search providers). With this two-way search, you can send out a query like “banana cream pie” and it will return the addresses of the nearest restaurants that serve it. You can also get gas prices at 125,000 gas stations. This kind of live data handily beats the static “points of interest” stored in the memory of one-way GPS systems. Points of interest become hopelessly out of date. Microsoft’s one-way MSN Direct can provide some data, such as freeway-only traffic conditions, but it also costs $5 a month.

You can also go to the MyDash web site on a computer at the office, look up your destination and with a single mouse click send the location to your device. When you get in the car, you don’t have to finger-type the address into the screen because it’s already there.

The Jasper Wireless connection is the main way to stay connected. But when you pull into your home, Dash’s Wi-Fi antenna can detect your wireless home network and download a hefty update at a high speed into the car unit.

Perhaps the smartest thing that Dash has done is open up its connected platform so that developers can create new applications for it. With such applications, you will be able to access restaurant reviews from site such as Yelp.

The problem for Dash is that it’s just a start-up among giants. And those giants are wide awake. Sony re-launched its GPS business at CES and showed off clever features Dash didn’t have. It included accelerometers and other sensors in its new GPS devices that enable them to keep a fix on a car’s location even if it loses a GPS signal or goes into a tunnel. Consumers aren’t necessarily going to pay a monthly fee and $400 for a navigation unit. During the last holiday season, there were plenty of dumb GPS units available for just $100. Dash has a challenge upselling those customers.

Over time, you can bet the competition will get tough for Dash. Google’s Android-based cell phones, for instance, will have location awareness built into them. Hence, your cell phone could become your own personal navigator. On the other hand, sometime in the future, Dash could put a cell phone into the Dash Express.

That would be just one step further in the direction of making GPS units into smart communications devices. I prefer getting my navigation from a dedicated device. And the Dash Express is the best one I’ve seen so far.