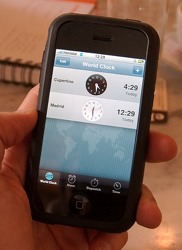 Lock up your kids, hide your wallet, and for God’s sake don’t buy a current generation iPhone: New reports of varying credibility suggest the release of a 3G iPhone is nearing.

Apple has finalized a deal with Hon Hai Precision Industry Co. (also known as Foxconn), Taiwan’s largest contract manufacturer, to develop the next generation iPhone according to the Dow Jones Newswires. Citing analyst speculation, the report goes on to suggest the 3G iPhone could be released as soon as May.

3G is the mobile broadband network AT&T utilizes, while current iPhones run on its slower EDGE network. Apple claims it decided initially to go with EDGE for the iPhone because it consumed less battery power.

While the Hon Hai story seems credible, the release date of the device is very much still up in the air. One problem with believing analyst speculation is that it’s just that, speculation. Already, technology firm Gartner has had to backtrack from speculative comments it made earlier in the week that Apple had placed an order for 10 million 3G iPhones.

Still, it’s hardly like Gartner are the only ones speculating about the new iPhone. Digg founder Kevin Rose insists that he has heard from good sources that the new device will be coming along shortly with advanced features such as video chat (our coverage). He went so far as to follow up on his speculation with a Twitter post this week, claiming to have yet another source stating that “it will ship in June [with] 3G support and GPS.”

Even AT&T’s chief executive Randall Stephenson got in on the fun late last year, stating that consumers would get a 3G iPhone sometime in 2008. Prior to that, Apple chief executive Steve Jobs himself told a crowd in London to expect the device sometime “later next year”.

“Later next year” doesn’t sound like May or June, but with Apple’s annual World Wide Developer’s Conference (WWDC) taking place in June, talk is growing louder that the 3G iPhone could in fact see a debut during a Steve Jobs keynote there.

One problem with such a quick approaching launch is that Apple has just unveiled its iPhone Software Development Kit (SDK) to developers for building applications on the current generation iPhone (the second version of the kit was just released yesterday). If Apple turns around and releases an iPhone with many new advanced features shortly after that, they run the risk of leaving quite a few of those developers — who might want to utilize something like GPS (which the current iPhone doesn’t have) — out to dry. Certainly Apple could and presumably would update the SDK to match the new phone, but months of work may be rendered obsolete.

So here is what we know: The next version of the iPhone, assembled by Hon Hai is coming in 2008. The device will very likely utilize 3G technology and could have features such as GPS and video-streaming capabilities as well. It could be released as early as May though June seems a more likely candidate.

The important thing to take away: If you’re considering buying an iPhone in the near-term, you may want to wait a bit. Welcome to the world of Apple.

update: It’s been about 45 minutes since I published, so naturally there is already a new 3G iPhone rumor. Bank of America’s Scott Craig is suggesting there will be 3 million 3G iPhones ready for the June quarter and 8 million more for the September quarter according to Barron’s.