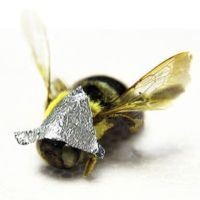 Not to be a fear-monger, but nanomaterials might make you sick. Not just you, but your family, your neighbors, even pets and wild animals. And it doesn’t matter whether or not you actually use anything with nanomaterials yourself; they’ll come to you. Yes, we’re talking here about the scaled-down substances that are the next big thing — the wave (and fad) of the future, contained in everything from batteries to computer chips, food to fuel, sunscreen to solar cells.

A new report from the Silicon Valley Toxics Coalition suggests that, because of their very popularity, nanomaterials are likely to cause the next instance of high-tech pollution, similar to the pollution caused in the early 1980s by Fairchild Semiconductor and IBM that poisoned hundreds in the Bay Area and cost those companies hundreds of millions in settlements and cleanup fees. The same scenario could well occur again, both to large companies and to younger, venture-funded startups just beginning to manufacture nano-scale products, says the SVTC.

To be fair to nanomaterials, there’s no proof yet — at least outside laboratories — that they’re harmful when released into the wild. But that’s exactly the problem. There’s no history of nanomaterial use; therefore, we can’t be sure what will happen. And here’s the second problem: Some of the few nanomaterials to have been tested in labs have been shown to sicken living organisms, and those few are only the tip of the iceberg, in terms of the many possible materials that can be used.

Explaining why nanomaterials could be harmful is difficult, because conceptually, they’re just tiny versions of what we already have. Nanosilver, for example, seems like it’s just tiny bits of silver, and it has already been incorporated into clothing, nail clippers, keychains and dozens of other products for its antibacterial properties. Yet nanomaterials actually interact, and react, with the world a bit differently, and lab tests have shown that nanosilver particles, for one, can damage both human cells and wild ecosystems, according to an MIT study quoted by the SVTC.

That’s less of a worry when nanosilver (or other materials) are bound into solid substances, as in the example of a keychain. More potentially harm, can come from, say, putting it in water, which can of course end up in people’s mouths, sewers or the ground. You might think, knowing that, companies would second-guess using nanosilver in water — but Samsung has had a washing machine that uses the substance for almost five years now.

What worries Sheila Davis, the SVTC’s executive director, is bio-accumulation. “We’ve already found flame retardants in mother’s breast milk, and the same thing will happen with nanomaterials,” she told me in an interview. “Companies say they’re only releasing minute amounts, so it won’t cause harm. But when all your products expose you to minute amounts, then it becomes a hazard.”

Davis isn’t sure which nanomaterials or applications of them could become problematic, but because of their growing popularity and the vast number of different materials that can be used, she’s certain that at least some will cause problems. Those problems will be exacerbated by the lack of government standards and our inability to easily detect stray nanomaterials — so by the time a problem can be seen, it will likely be serious.

For companies, that will lead to lawsuits. When I asked Davis what companies and investors could do to avoid potential liabilities, she didn’t have any easy answers. Instead, she suggested that testing needs to be done, both of the life cycle of the materials being manufactured and their interaction with living organisms. They should also closely monitor workers for problems, and keep in touch with their surrounding communities in order to spot early signs of contamination. And of course, companies making products for consumer use — especially things like aerosols, creams, food wrappings and medicine — are most at risk.

These aren’t entirely new concerns. Bill Joy, a partner at Kleiner Perkins, has been strident in his warnings about the many dangers of nanotechnology. Others have also spoken out, but their views are often so blatantly ahead of the curve — involving gray goo, intelligent machines and other futuristic scenarios — that critics find it easy to dismiss them. (Also see the link to Michael Crichton’s Prey, left by a commenter below.) What hasn’t received enough attention yet is the right-here, right-now danger that already exists.

The SVTC suggests a series of regulatory steps designed to oversee the nanotech industry, but there’s a fine line between safety and over-regulation. There are pre-existing EPA rules governing “new” substances, but they’re not likely to catch many problems. Instead, we’ll probably cruise along — until something serious occurs.