Would you invite friends to an online dating service, to help you in your escapades?

Engage, a San Mateo-based startup, believes you will. Friends are helpful in connecting you with dates in the offline world, so the idea is they’ll vouch for you online as well. In fact, Engage says 262,000 unique visitors used its service last month.

The company officially launches its online dating service today, after two years of testing (see our coverage). That’s a long time. Its traffic is respectable, but not huge. If the wing-man approach is really effective, wouldn’t there be more buzz by now?

Well, Trish McDermott, the company’s vice president of Love, says it’s early days, and that’s true. Most bigger competitors are several years old. Engage is the first “second generation social dating site” on the net, she points out. It provides a place for “mingling, mixing, matching and flirting,” and is such more social than other online dating services, she notes.

To refresh, here’s how it works: To be a matchmaker on the site, you cast your vote to suggest couples, or use the Play Matchmaker feature, which lets you introduce your friends to dating candidates you think would be good for them. You can also see who else your friends are introducing to others. 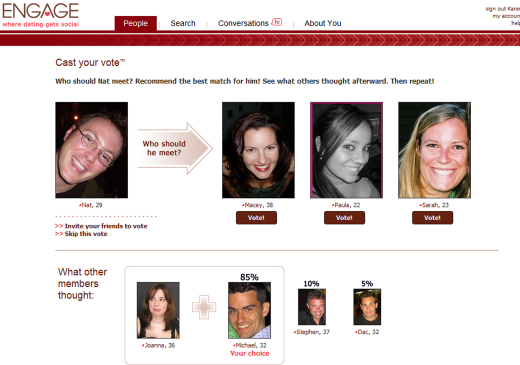 “Think how many times you’ve been introduced by your friends to a possible date in a cocktail party. And you’re used to hearing, ‘Oh God, that’s your dream man’, or warnings: ‘No, you can’t date him.'” Those helpful cues can be helpful online too, says McDermott.

You’d think McDermott might be on to something. Before joining Engage in 2005, McDermott was VP of Romance at Match.com, where she’d joined the start up team in 1994 and helped design and launch the site a year later. She calls herself “a dinosaur” having worked in the dating industry for 18 years.

Engage lets users earn social points by being active, and they can track the site’s most active members on a leaderboard.

With enough points, a user is upgraded to the site’s next social status level. In the future, you might be able to use the points much as they’re used for trading things in an American Express Program, for example, to get a free subscription on Engage. Or the most successful Matchmaker of the year could get a trip to the Caribbean on Valentine’s Day.

According to a recent report by Jupiter Research, online personals revenue will increase from $900 million in 2007 to $1.9 billion in 2012. Engage wants to have its share, and the company is hoping to attract 2 million registered users by the end of this year.

Even if its numbers are growing, Engage has a long way to go until it beats its competitors: Match.com had 1.3 million paying subscribers in the US by the end of last year, according to the service’s parent company IAC, and 7 million unique visitors in February.

EHarmony, often considered the second biggest service, had 5 million unique visitors in February. As impressive as those numbers sound, both Match and eHarmony appear to have shed up to half of their raw incoming traffic since a high point about three years ago, according to public analytics data, despite incessant advertising campaigns. Engage appears to be setting itself up as their competitor, which may be unwise, given the stigma attached to frequenting a traditional dating site.

VentureBeat has covered other sites attempting to move away from the Match.com model, like WooMe, which avoids using the word “dating” and instead focuses on short video chat sessions, and OKCupid and Plentyoffish, which dispense with the pay model, instead relying on ads. Engage, sticking with the subscription model, plans to begin charging for the first time later this year (and we point out, it’s difficult to start charging once you’ve made something free for so long).

Another point against Engage is its enforced social networking: To get its features working fully and to distinguish it from other online dating services, users have to get their friends to join them on the site. And not only a few friends, but a whole posse, so that mixing and matching can actually happen.

The privacy of a particular group can be restricted so that not everyone in the service can see who you’re flirting with or have been dating. The privacy restrictions are similar to the ones in Facebook, says McDermott. But would I want my friends (the few who could be persuaded to join the service) to see who I’m communicating with in an online dating service? Wouldn’t it be embarrassing to search for dates publicly in the front of a big group and then be expected to gossip online about the virtual contacts? What if I were to FAIL, time and again?

Maybe I’m just old-fashioned. What do you think? Engage took over $5 million from Advanced Technology Ventures, the Founders Fund, and Revolution Ventures, with its second round closing two years ago. The company employs about 20 people.