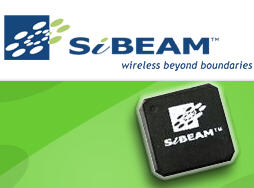 SiBEAM, a company developing technology to stream high definition video more quickly than any existing technology, has raised $40 million in third round of funding.

The financing was led by New Enterprise Associates. The other firms backing up SiBEAM are Foundation Capital and U.S. Venture Partners.

SiBEAM, of Sunnyvale, Calif., is developing a technology called WirelessHD. The technology helps you move rich, high-definition data like video wirelessly from one gadget to another, such as from your portable digital video camera to you TV. We’ve covered the company earlier.

WirelessHD competes with WirelessUSB and WiFi. Wireless USB transfers data at a speed of 480 megabits a second over three meters, while wirelessHD uses the 60-gigahertz spectrum and works in higher speeds, starting at four gigabits at 10 meters and with the theoretical maximum speeds of up to 25 gigabits a second, as the technology matures. That is more than ten times faster than WiFi solutions.
SiBEAM is the first company to build 60GHz chipsets using a complementary metal-oxide semiconductor (CMOS) technology that lowers the costs of the WiHD solution so that it’s affordable for the mass market.

With the money raised, the company hopes to get is the first WiHD-gadgets to shops by the end of this year.

If SiBEAM succeeds, it will be remarkable. The video market is huge, and who wouldn’t want to download videos faster?

The first devices available to consumers will be “little adapter devices” that are used with the existing gadgets like TV, HD movie players, camcorders and gaming consoles, says John LeMoncheck, the President and CEO of SiBEAM.

The price of the adapter is expected to be on par with WiFi adapters. With the adapter, WirelessHD can be used with old gadgets. WirelessHD chips embedded to new TVs and other new gadgets will appear in shops in the beginning of year 2009, LeMoncheck says.

If you’ve just bought a flat-screen TV, and want to transfer hi-definition video from your laptop or camcorder to your TV, you can buy the adapter — instead of having to buy a new TV.

He says that the main target for the solution is new flat screen TVs. WiHD will work with a range of ten meters, so it’s meant to be used between the devices in one room, not in the whole house.

John LeMoncheck said he is convinced that WiHD will win “the battle of wireless technology” and become the standard in wireless. WirelessHD is promoted by SiBEAM, Intel, LG Electronics, Panasonic, NEC Corporation, Samsung Electronics, Toshiba and Sony. The companies formed a group to promote WirelessHD standard in the year 2006.

SiBEAM was founded 2004 by experts in wireless communications from the University of California, Berkeley and the private industry. The company has 80 employees.