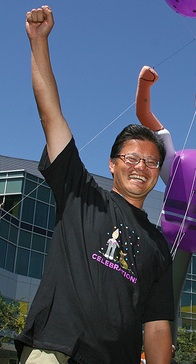 Microsoft chief executive Steve Ballmer released a threatening letter to Yahoo over the weekend in a strong-handed attempt to bring Yahoo to the negotiating table. Today, Yahoo’s chief executive Jerry Yang has responded to Ballmer with a letter of his own. The consensus? We can talk — at the right price.

While it was expected that Yahoo’s letter would have a theme of Microsoft undervaluing the company, not expected was just how candid and detailed the letter is. Starting from the opening “Dear Steve:” to the closing “Very Truly Yours,” this letter reeks of disdain.

Early on in the letter, Yang lays out the steps it has taken since the initial proposal to bolster the company. These include the financial and strategic vision plan (our coverage), the multiple product launches (such as Yahoo Live, Yahoo Buzz and Shine, among others), and the new AMP advertising platform — still months away from deployment (our coverage).

Multiple times, Yang (along with letter co-author Roy Bostock, Yahoo’s chairman of the board) reiterates that Yahoo is not opposed to a deal with Microsoft, but will only do so at fair value.

Then things get interesting. Yang basically calls out Ballmer for lying in his letter:

We regret to say that your letter mischaracterizes the nature of our discussions with you. We have had constructive conversations together regarding a variety of topics, including integration and regulatory issues. Your comment that we have refused to enter into negotiations to conclude an agreement are particularly curious given we have already rejected your initial proposal, nominally $31 per share at the time, for substantially undervaluing Yahoo! and your suggestions in your letter and the media that you are considering lowering the value of your proposal. Moreover, Steve, you personally attended two of these meetings and could have advanced discussions in any way you saw fit.

Yang then reveals some details of recent meetings the two sides have had, including discussions about how a combination of the two companies could pass antitrust watchdogs. Yahoo claims Microsoft has still not clarified its plans on this front.

This letter is all about repetition: Yahoo’s financials are sound going forward, Microsoft’s bid undervalues the company, Ballmer is misrepresenting the facts, but, Yahoo is still open to talking at the right price. It’s clear that Yang aimed to drive these points home to the shareholders out there who may be feeling mutinous after Microsoft’s letter over the weekend.

In terms of stock stability, the letter appears to have worked. After plummeting down on rumor of Microsoft pulling its bid on Friday, the stock has bounced back a bit today, now down only 2 percent (instead of over 5 percent).

You can probably expect another letter from Microsoft sometime this week, as well as more talks between the two sides.