Nokia, the world’s biggest mobile phone supplier, is developing a new kind of navigation instruction system for mobile phones. With landmark-based navigation you won’t even need to know your address or cross streets to get directions. You just take a picture of a nearby landmark, like the Golden Gate Bridge, with the camera in your mobile phone. Then, Nokia will match your photo with other landmark photos in its mapping database, and tell you where you are. Instructions to your destination are given by red arrows added to pictures, text or voice.

The picture is sent to a server and there matched to the right picture in the database, and you get the instructions to your phone. In Nokia’s “mobile tourist guide” feature you get even further information on the landmark, for example that the Golden Gate Bridge was completed in 1937 and it has the second longest suspension bridge main span in the US.
You may not even need to send a photo to the database, they may be automatically downloaded to your phone. “When you arrive in a new place, the GPS in your mobile spots where you are and sends you a smaller database of pictures of the landmarks in your surroundings. This way the service works faster,” Research Fellow Kari Pulli (pictured below), of the Nokia Research Center in Palo Alto, Calif., says.
Or, you can download the data of landmarks in advance to your phone’s memory card, as you can do now when using Nokia Maps. This picture-based navigation system will be a part of Nokia’s mapping service, which is otherwise similar to other mobile mapping services, like Google Maps, Yahoo Maps, TomTom, and others.
Dr. Pulli says that there is nothing like it in the navigation market at the moment. “The instructions are based totally on real world pictures, not on synthetic maps,” he says. “We started developing the landmark mode when we realized that people read maps in different ways depending on things such as cultural background and gender.”
A Nokia research group in India figured out that people there navigate a lot by using landmarks. “In India it’s common to give instructions like ‘Turn left when you see a gas station, and follow the road until you see a big tree on your right,'” Pulli says.
Landmark navigation would work on Nokia smart phones, and most likely on other manufacturer’s phones, like Samsung’s and LG’s, that use S60-platform. The system wouldn’t necessarily cost to the customers as it could be sponsored by ads on the service, Pulli says. 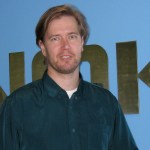 The prototypes of the navigation instruction system based on image recognition and landmarks have been tested by student groups at Stanford University in Palo Alto and at the University of Washington in Seattle.

Although Nokia got positive feedback from the students, the research group has remaining issues to fix before the system can be brought into market. Are the pictures of the landmarks of good enough quality so that the buildings or crossroads can be easily recognized? What if the user looks at the building from a different angle than the picture was taken? Or if the building is covered by snow and mobile phone shows a picture taken in summer?
“It’s about creating a database of pictures wide enough so that we can provide enough pictures even on one landmark,” Pulli says. Nokia shouldn’t have problems in getting a good database for maps, but pictures are another thing. The company announced last year that it will acquire Navteq, the leading digital map provider in the world. The deal is supposed to be completed this year. Both Google Maps and Yahoo Maps are driven by Chicago-based Navteq‘s databases.
Navteq collects general map data with cars, and Pulli thinks it would be possible to photograph the landmarks while the other data for the maps are collected. Nokia also bought Gate5, the leading supplier of mapping, routing and navigation software and service couple of years ago. Gate5 has its headquarters in Germany, but the company develops its middleware in Silicon Valley.
As we have covered earlier, there’s a growing market in the location-based mobile services, as smart phones becoming more common. Nokia obviously wants a share with its mapping company purchases and navigation project that is one part of its augmented reality research project.
Navigating with the help of landmarks is an idea worth trying in areas such as college campuses, hospitals and airports where you usually walk or drive in a low speed. When navigating in high speeds the mobile phone screen is not a very useful guide, even if the pictures of the landmarks the database provides are big and clear. And even the best mobile phone screen can’t beat the big screen of the latest car navigating systems such as Dash, which we have covered. When driving, the image recognition system is almost impossible to use – just try snapping a photo when driving down the highway.
But, Pulli says, the instructions could be transferred in your car navigation system. That would solve the problem of the small screen, and also the problem of the restrictions in the phone use while driving. Many countries in the world and many states in the US has banned to use mobile phone when driving. In California the ban begins July, 1, this year.
The audio problem: Learn how new cloud-based API solutions are solving imperfect, frustrating audio in video conferences. Access here