Hoping to capitalize on the tremendous amount of free, tidal energy offered by the St. Lawrence River, the government of Ontario has committed $2.2m for a 15 MW underwater turbine project to be handled by New York-based Verdant Power. The turbines will be installed on the floor of the river and used to generate enough electricity to power up to 11,000 homes.

Company officials estimate that there may be enough power in Canada’s water currents, rivers and channels to produce close to 15,000 MW — enough to provide electricity for over 11m homes. Verdant Power’s first — and only other — large-scale turbine project, the RITE (Roosevelt Island Turbine Energy Project), in New York’s East River is expected to generate close to 10 MW when it is completed.

The RITE Project has, however, run into several problems over the course of its implementation — mostly resulting from the river’s strong currents, which overwhelmed the construction of the turbines. Their propellers were sheared off a third of the way down and destabilized as a result of having weak bolt connections to the turbine hubs. Based on initial results, Verdant’s turbines produce electricity for 7-8 cents/kWh, competitive with non-renewable sources.

The turbines’ environmental impact is considered relatively benign; the blades are blunt-edged and rotate slowly enough that they allow fish to pass through without harm. The real question is whether underwater turbines will prove a viable investment over the long term: They might still get knocked down by a strong current, their blades could get gummed up with barnacles or they might simply degrade over time due to wear and tear. 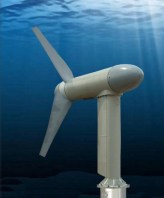 Verdant has received $15m in initial funding from Tudor Investment. One of Verdant’s competitors, Oceana Energy, inked a deal with PG&E last June to develop a similar project in San Francisco Bay and is also working on expanding its presence upstream of Verdant’s site in New York.