Music videos are plentiful on the Internet. But Jeff Somers, the CEO of PluggedIn, believes that nobody has built a community around them the right way. So PluggedIn is unveiling its web site for music video aficionados today.

The site has more than 10,000 free music videos in both broadcast-quality and high-definition formats. It also has built social-networking into the site, with options for fans to fill out their musical-taste profiles and to find other like-minded people.

PluggedIn has the support of three of the four major music labels. It has video content from Universal Music Group, Sony BMG and EMI. It is in talks with Warner. It competes with other video sites including YouTube, Yahoo, AOL, and MTV. But Somers says his site has the highest-quality video experience. 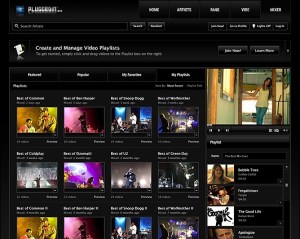 Beyond streaming music videos, PluggedIn also offers fans a chance to explore and discover music and friends. Fans can make comments on the videos with their own pictures attached to the comments.

Taking on the giant portals won’t be easy. PluggedIn has just 12 people in Santa Monica. It was started a year ago by veterans of the Xdrive sharing service which AOL bought in 2005. PluggedIn has raised $2 million so far. Investors include company principals as well as Overbrook Entertainment, the investment company started by actor Will Smith and film maker James Lassiter. Brett O’Brien, founder of Xdrive, is chairman of PluggedIn.

Somers hopes that fans are ready to graduate from grainy, Flash-based videos on YouTube to a better experience, much the same way that Hulu.com is betting that people want free HD movies and TV shows online.

The company will make money from an ad platform that it will introduce later. It can also make money through affiliate programs. It lets fans easily navigate to iTunes or Amazon.com to buy downloadable music videos and thereby get a cut of the sale. It does the same for merchandise at Hot Topic or concert tickets at StubHub. 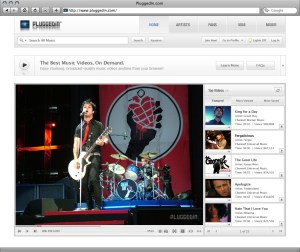 The site being launched today requires users to download PluggedIn’s own video player. In the future, Somers said that the company may launch widgets that can reside on social networking sites such as Facebook or MySpace.