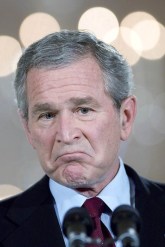 The most notable of Bush’s statements was that greenhouse gas emissions within the United States should peak in a decade or so, with a total halt in their growth in 2025 and a decline thereafter. Bush also stated that the United States would join an international accord and commit to binding targets if other countries, including developing economies like China and India, also do so.

Much of the rest of the speech was an attempt to shape future policy. Bush suggested that instead of the climate bills currently on the table, a combination of incentives and caps should be used to avoid “harming the economy” as legislation forcing emissions cuts would — in effect, a suggestive nudge for industries, rather than an aggressive push. He also noted that a federal approach is needed, rather than state-by-state rules. (Probably a dig at California, whose emissions laws are much stricter than the federal government’s.)

The Rose Garden speech fits into a recent Bush Administration trend toward a more moderate stance on environmental issues, and away from the flat-out denials of earlier years. However, in terms of ambition, it fell flat. If climate change is real, emissions need to be in decline long before 2025, at least according to most of the scientists — and even most other politicians — in the world. One activist even told the Wall Street Journal that the president’s speech was a “step backward”.

But even an unenthusiastic tip of the head toward cleantech from the top office proved to influence markets. Following the speech, shares in four major solar panel manufacturers rose about 5 percent each.

In part, that’s because many expected the current Administration to hold onto its obstructionist policies. A switch in direction by Bush likely indicates that he’s worried about the light in which he, and his party, will be seen in the future. In other words, he sees that public sentiment — still the most powerful political force — is shifting.

And with a new candidate coming into office in less than a year, the Bush Administration’s moves toward a pro-environment policy, feeble or not, lay the groundwork for immediate movement by a new, more aggressive president — as all three of the possible candidates are certain to be.

The true positive from all of this is for large financiers like banks, private equity and sovereign funds. Such investors need to be assured of a long-term positive outlook in cleantech, for projects that cost hundreds of millions of dollars — dollars that in turn support the entire sector. And with the political climate in the U.S. visibly changing, the future of that money looks more assured.