Unisfair is trying to get businesses to take virtual trade shows as more than a curiosity. On Monday, the company will announce version 2.0 of its Virtual Events for Business tool, VentureBeat has learned.

The Menlo Park, Calif., company helps businesses stage trade shows online so they can cut the costs of phsyical trade shows, yet reap the same benefits of gathering for talks and exhibitions. The new version delivers capabilities such as e-commerce, multiple-language support, and professional networking.

“The improvements are aimed at improving the stickiness of the virtual events,” said Guy Piekarz, CEO of Unisfair, in an interview. 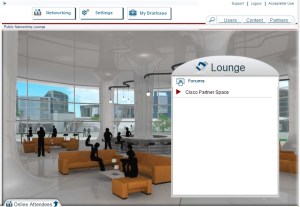 A survey from the Factpoint Group says that virtual events attract an average of 1,587 attendees (42% of which are international). Thanks to increased attendance and the availability of detailed marketing data, such events deliver 348 qualified leads per each event sponsor.

Unisfair’s environment lets attendees create avatars, or 3-D characters, that they can use to browse through the virtual trade show. They can interact with text or voice chat. And the environment integrates with online business tools such as Salesforce.com or the Webex online meeting tool.

Clients such as Cisco and Forbes have used Unisfair to hold 415 events since the company debuted the virtual events . More than 500,000 people from 2,000 companies have attended the events. Over time, Piekarz said the virtual events will move to more of a self-serve model where companies can stage their own events without too much hand-holding.

The company closed its second round in December with $10 million (our coverage) from Sequoia Capital and Norwest Venture Partners. Sequoia invested $15 million in the first round. Unisfair has 65 employees. The company will compete against the larger all-purpose world, Linden Lab’s Second Life, as well as Forterra Systems‘ custom corporate virtual worlds. IBM has also given its own endorsement to virtual worlds as useful beyond entertainment.