Venture investment fell 8.5 percent during the first three months of 2008 compared to the final quarter of 2007, according to the new MoneyTree Report from PricewaterhouseCoopers and the National Venture Capital Association. The report is a big, comprehensive study that reinforces what everyone already kind-of knew, or at least suspected. It tracked a total of 922 venture deals worth $7.1 billion — in terms of dollars, that’s an 8.5 percent drop.

In a conference call discussing the report, NVCA Vice President John Taylor emphasized that investment tends to be cyclical, and that the first quarter of the year tends to have less investment than the second or the fourth. But Q1 2008 was also down from the $7.5 billion in venture money invested during the same period last year.

Nina Saberi, a partner at Castile Ventures, said one of the most significant factors that will continue to hurt venture investment is the decreasing number of IPOs — according to the NVCA, there were only five IPOs during the first quarter of 2008. The acquisition market is weakening too, Saberi said, which is putting downward pressure on valuations. All of this means venture firms need to support startups for a longer period of time before their exits, and that firms therefore need to be more careful with how they invest.

First-time deals also fell 18 percent to $1.6 billion invested in 294 companies. Those deals accounted for 23 percent of all venture dollars during this period.

“We see from an early stage investing point of view, the economic slowdown has had an impact and perhaps people are being mindful of the economic slowdown,” Saberi said. “But, at the same time, the effects of it are milder than you might imagine from listening to the evening news.”

The report also breaks the deals down by industry. Biotech received the most money, with $1.27 billion going to 126 deals, but software had the most deals, with $1.26 billion in 234 financings. 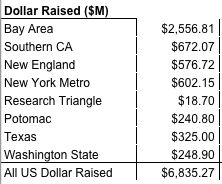 Update: Dow Jones VentureSource has broken down Q1 investment by region (see screenshot, left). Not surprisingly, the San Francisco Bay Area saw the most money invested, with $2.56 billion in 213 deals. Southern California came in second, with $672 million in 63 deals.