As expected, online media company LiveUniverse has acquired Pageflakes, the online site that provides people with a starting page where they can import all their favorite content.

Rumors of the deal first emerged Monday. There were so many start page companies launched over the past few years, that it’s certain the Pageflakes wasn’t sold for very much 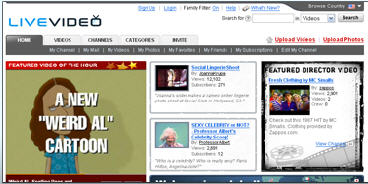 The transaction was a combination of cash and stock, but the deal amount was undisclosed. Investors at Balderton Capital, which led the company’s $4.1 million in backing, declined to provide more details. Both companies are private, with LiveUniverse based in Hollywood, and Pageflakes in San Francisco. In other words, its a perfect example of the marriage between Hollywood media and Silicon Valley tech happening right now.

In a statement, the companies said initial integration will be with LiveUniverse’s video entertainment network, LiveVideo (www.LiveVideo.com). This will let users remix videos, photos, music, blogs with content from their favorite sites on the Web, the companies said. Pageflakes technology will make it easier for LiveVideo users to personalize the layout of their profiles. Users will get their own “My LiveVideo” personalized page.

Users can then “Pagecast” (share and publish) these pages within their LiveVideo social network or to everyone on the Web.

Both companies share a technology platform based on ASP.NET.