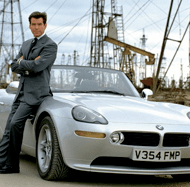 Pretty much every James Bond film with Pierce Brosnan seemed to be a cross between a movie and a BMW/Omega/fill-in-the-blank brand advertisement. Even though the last film, Casino Royale, was more tastefully done, there were still those scenes where a product like Sony’s Blu-ray was prominently displayed in a shot.

Product placement has long been a part of film and television productions — and now it’s coming to the web. NBC Universal is creating web-only video programming that will prominently feature sponsor’s products, according to CNET.

While video on the web is popular, companies have been struggling with ways to monetize it. For example, Google bought YouTube in 2006 for $1.6 billion, but last year made as little as $20 million in revenue from it. YouTube recently launched a campaign with the new film Get Smart to place ads for the movie on YouTube pages where humorous clips reside (our coverage).

That plan along with this product placement idea shows companies are at least thinking beyond the traditional 30-second ads found on television, but will consumers be turned away from advertisements in these shows?

Working with the Omnicom Group, one of the largest advertising and marketing companies, NBC will begin to roll out these new shows on its digital properties such as Hulu (our coverage) in the coming months. The first such show will be a sci-fi show called Gemini Division.

Acura, Intel, Microsoft, and UPS are already on board as sponsors. Expect to see actress Rosario Dawson (the star of the show) driving her Acura to a UPS store to ship her new Intel Core 2 Duo Windows-based PC.