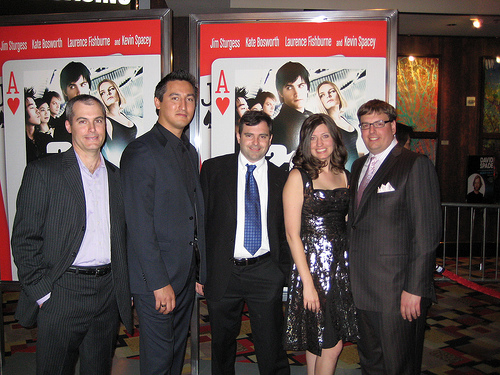 Mochi Media, an online ad and analytics company that helps online game developers run ads within their works, has hired a new vice president of engineering away from Yahoo. It’s Eric Boyd, a Yahoo employee of ten years and a former member of the notorious card shark outfit at MIT, which the movie 21 is based on. (He’s pictured, middle, with his comrades at the movie’s premier.)

Boyd has worked as an engineer and product manager on core services, most recently Yahoo’s member login — he’s probably one of the people that Yahoo has been trying to retain through lucrative packages.

San Francisco-based Mochi hasn’t offered many details on its growth to date — other than to claim a leadership position in the so-called in-game ad market, as Boyd tells me. Mochi ads are getting an average of between five and seven percent click-through rates, with 20 percent month-to-month growth in traffic.

Mochi, which works both directly with large brands, and with ad networks, is already making some developers thousands of dollars, he says, adding that one of the attractive things about Mochi is that it has a revenue stream already.

Boyd’s experience building and running large software systems will come in handy, as Mochi intends to be a sort of Google AdSense for game developers.