There are already a few models out there for helping groups collaborate, including wikis and more complex conceptualizations of project management software.

Into this competitive area of web software steps Grou.ps, a sort of group-focused web software service. The company is trying to combine blogs, wikis, aggregated rss feeds, live chat and other key components of web communication into one, coherent system. One person creates a group and invites more members. Each member has their own profile and sees a dashboard with tabs for each of these features. So you click on the wiki tab, for example, once you’re logged in, and you’ll see a wiki that you and your group members can use together.

Grou.ps also supports photos, links, calendars, forums, maps, user profiles, subgroups — you can mix and match whatever you want — and add third-party services into, such as photos from Flickr.

The core advantage Grou.ps has over its competitors is that it can combine a few key functions on a given page, in a way that’s hopefully just right for a group. Check out this screenshot of a stream of RSS feeds pulled from various sites, coupled with a live chat window, that I set up for the VentureBeat team. The idea is good: Right now, members of VentureBeat read RSS feeds from other sites within Google Reader, Bloglines or another RSS reader service, then chat about them together on a freestanding IM service. Grou.ps would let you do it all at once, in one place. 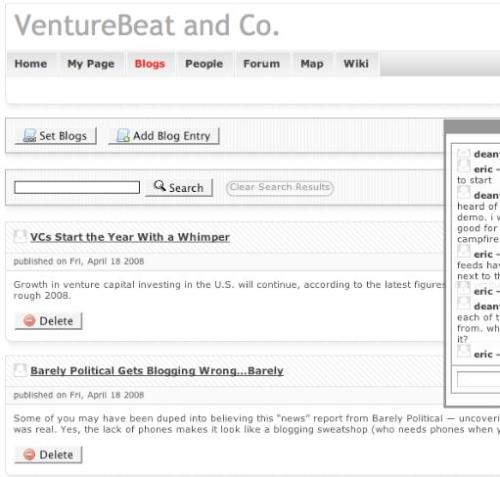 The problem for Grou.ps, so far, is that the interface is confusing. For example, the VentureBeat team needs to be able to do things like see which feed is coming from where, perhaps to see if a member of VentureBeat broke a story or if a competitor broke a story. In Grou.ps, you can’t get to that level of granularity unless you go into a rather detailed submenu to adjust that setting.

(Note: Check out this more established site, based in Turkey.)

The site has the feel of many carefully-planned interface features like that. In fact, so much forethought has gone into the site that sometimes general use cases have been sacrificed to make sure that edge cases are served. The reason for not showing which feeds are from where when you first start using the feature, the company says, is to create a more holistic feeling of reading a stream of feeds from various sites without having to see where they’re from. In other words, the company assumes that most of its users won’t want to see where a given feed is coming from.

The site is going into public beta now, already has more than 150,000 total users. It has raised funding from Golden Horn Ventures.