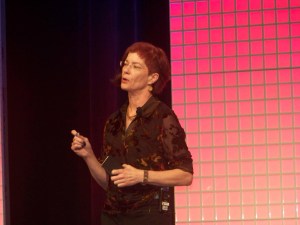 To unleash the wild creativity of the Internet on mobile phones, we have to open them up to the real Internet, says Mitchell Baker, the second speaker of the morning at the Web 2.0 Expo in San Francisco.

The chairman (er, chairwoman) of Mozilla says it shouldn’t matter what device you use to access the web.

Mozilla is the nonprofit that makes the Firefox browser, which is being used by hundreds of millions of people as an alternative to Microsoft’s Internet Explorer. (For a view of how big, check our Q&A with Mozilla CEO John Lilly)

She says that mobile browsers should all just work. The use cases do argue for different devices, but you will always want things quickly and with few keystrokes. “The information is the same,” she said. “We should be able to access it, mix it up, mash it up, save it, store it. All of those things should be the same if I am on a laptop or phone, at home or on a train.”

Use cases are driven by the constraints of a mobile device. One reason why having one web is important, she said, is that mobile devices need to deliver the same kind of experience, where you can discover new uses for the device after you buy it and after you start browsing the web. The good thing about the PC is that the experience keeps evolving and those new uses are as important as what we bought the machine for, she said.

She noted that the metaphor “browser” is archaic. How many of us simply browse? The web is far more active than the word implies. We need, she says, an open web-based platform in the form of Firefox so that Web 2.0 developers can reach people on mobile phones. It will have competition, she says. (In fact, Opera’s CEO Jon von Tetzchner recently told me that Opera Mini is on 40 million devices now and Opera Mobile has many users too).

Developers get a base from Firefox and can build on top of it. Closed systems like Microsoft aren’t innovative or helpful at promoting diversity, she said. The browser can bring masses of innovation to the mobile web, she said. Firefox does fit on mobile devices now, including phones from Nokia and others.

“Throughout 2008, you’ll see new ideas and experiments,” she said.

Why does the open platform and one web matter? Say you want to find a restaurant near you. She wants to use the phone to find it. But she doesn’t want it wandering off somewhere and doing things on its own, particularly if she loses it.

“We can see it’s possible,” she said. “Firefox will be the fastest, most efficient way to get there.”

Again, I’m sure that Opera’s von Tetzchner will beg to differ. He told me that Opera was the fastest browser with the smallest footprint and has been proven for years in the mobile environment.