Docstoc, a site that’s billed itself as the “YouTube for professional documents”, has raised $3.25 million in a second round of funding. It’s also rolling out a new plan that allows document providers to run banner ads.

The Beverly Hills startup competes against companies like Scribd to help users post and share documents online. While Scribd launched first, Docstoc tries to stand out with its focus on professional documents. For example, when the service launched in October, we found that it was possible to post Excel files to Docstoc that that were rejected by Scribd. Since launching officially, the site has grown from more than 7,000 users to 85,000. Apparently, Docstoc has been used at big news sites like The Huffington Post — we’ve used it at VentureBeat, too.

Docstoc is also launching a content partnership program, which is basically a way for someone to run ads with the documents they’re sharing through Docstoc, free of charge. Previously, lawyers, for example, who posted sample legal documents on Docstoc could advertise themselves through profiles that are displayed above their documents, but now Docstoc is offering full banner ads (see screenshot below). It’s a good deal for advertisers, since you know exactly what content your ad will run next to, and it also gives you more incentive to share documents on the site. (On the other hand, it’s hard to imagine that a banner ad will be much more convincing than a really helpful document and an informative profile that links back to your site.) Partners can also use Docstoc to sell premium services and reports. 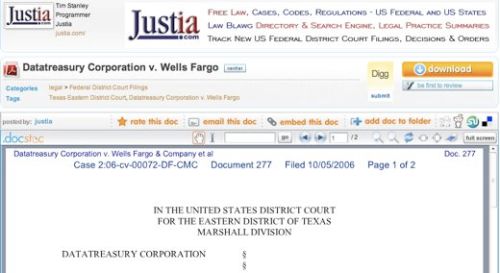 The new round was led by Rustic Canyon Partners.