Updated with Twitter’s “real” traffic numbers, below the original post. 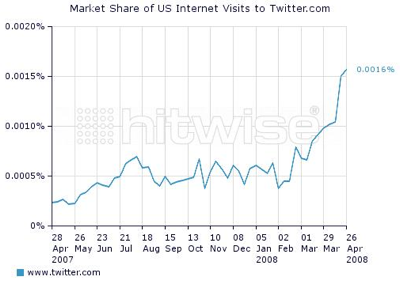 Web analytics service Hitwise has just released more data on web traffic to group messaging service Twitter, confirming what many blogs have anecdotally observed. Which is that the service is growing fast: It has received eight times more Internet visits now versus a year ago, Hitwise claims.

We’ve already spent a lot of time explaining how Twitter’s simple means of communicating short messages between friends has won over many former haters, so now lets focus on the numbers.

While Hitwise says that Twitter now accounts for 0.0016 percent of all US internet visits, its actual amount of traffic is certainly much greater. Internet visits comprise only a portion of Twitters total traffic, as you can use it through third party desktop applications like Twhirl or third-party web applications like Friendfeed. The company has also seen significant growth abroad, including Japan, and Hitwise doesn’t measure international traffic.

Growth also appears to be accelerating now. Visits have more than doubled in the last three months, and have gone up 60 percent in the past month. Hitwise thinks the causes of the growth have been widespread coverage of Twitter in a news events: Specifically, Its role in helping an American reporter get out of an Egyptian jail as well as public debate about its rumored funding (Twitter is a poster child for web companies that focus on growth, rather than revenue — it has only just started experimenting with ads). 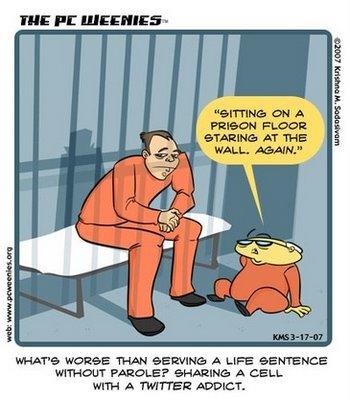 Hitwise concludes that Twitter is still small, but frankly, I haven’t seen just a couple stories that may have caused its traffic to spike. I’ve seen many news events where Twitter has been used, where Twitter has itself garnered nice chunks of publicity (or has even been the central mainstream news story). For example, when the Olympic torch came through San Francisco last month and got met by protestors, many people used Twitter to provide up-to-the-minute shorthand reports on what was happening.

My own anecdote here is that I wrote an article about Twitter’s use in the San Francisco torch protest, and saw traffic come to my story when it appeared on Google news, then an increase in my number of Twitter followers. While some of those followers were certainly existing Twitter users, others were pretty clearly new people who had found out about Twitter through trying to find out about the Olympic torch protests. Correspondingly, Hitwise says that a large portion of new users come to it through search engines.

Meanwhile, Twitter’s traffic appears to be solidifying, with new users quickly converting to constant users, according to Hitwise.

I expect Twitter to keep going more and more mainstream, especially driven by journalists and others who use it to keep their audiences informed.

Update: Arrington has a source with what he says are the real Twitter traffic numbers. From the post:

For VentureBeat readers who use Twitter, you can follow us here: Dean Takahashi (@deantak), Anthony Ha (@anthonyha), Chris Morrison (@chrismorrison), MG Siegler (@parislemon) and myself (@eldon). You can also follow VentureBeat’s feed of new stories (@venturebeat).