The famed Palo Alto Research Center opened its doors to journalists today to show off a bunch of research projects from smart documents to cleantech. 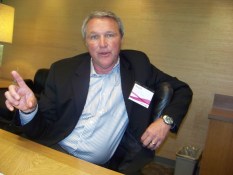 Mark Bernstein, head of PARC, told me today that no interviewer ever forgets to ask about how Xerox fumbled the future by failing to commercialize the technologies behind the personal computer that built companies like Apple. But he says the R&D center — the birthplace of the laser printer and Ethernet networking — is determined to commercialize its inventions through its business groups and leverage its 165 researchers in Palo Alto. Now the projects that PARC and other Xerox R&D labs showed off could be licensed by a venture-funded start-up or other big tech companies. Hence, it makes sense for the company to publicize some of the research as widely as it possibly can.

Xerox spun out PARC in 2002. Back then, it funded 100 percent of the research. But today, Xerox funds only about 50 percent of the work. The rest is financed through licenses to other corporations, research partnerships with big companies, and government grants. Chris Morrison recently wrote about it.

Xerox itself has had more than 55,000 patents in its history and still gets 10 a day, said Sophie Vandebroek, Xerox’s chief technolog officer. But the research isn’t scattered. It zeroes in on environmental technology, mass customization, and smart documents. Xerox invests $1.5 billion a year in R&D and it has more than 800 researchers. Over the last three decades, PARC’s technology has spawned 40 spin-offs.

Here is a summary of the projects that I saw today: 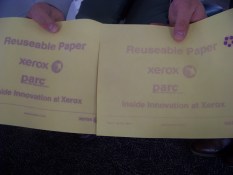 Eraseable Paper was one of the most interesting demos I saw. Think of the old invisible ink with lemon juice. Researchers Eric Shrader of PARC and Paul Smith of Xerox’s Toronto lab showed how they could save a lot of wasted paper printouts by using the same pieces of paper over and over again. Shrader noted that 44.5 percent of all documents printed are used just one time before they are tossed out. These include directions, emails, calendar pages, and cover sheets. At PARC itself, about a quarter of the time the papers are recycled the same day they are printed. Studies show it takes about 204,000 joules of energy to make a piece of paper. It takes 114,000 joules to make a piece of recycled paper. But it only costs 2,000 joules to print one sheet of paper. Hence, if you can print over and over again on one piece of paper, you can save a lot of energy. 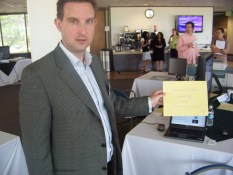 These researchers created their eraseable yellow paper with photochromic switch materials. This is the kind of light-sensitive material that is used in sunglasses that darken in the sunlight. That means they change color when they are struck with light, in this case ultraviolet light. The UV light bar moves up and down a page and shines its light where needed to make an image on the paper. The printout fades to a blank page within 24 hours. It smells like the old mimeograph pages, but it doesn’t stain your hands. For now, the researchers have built the UV printer into a multi-function copier. That way, someone can choose each time they print whether they want an eraseable print or a normal print. 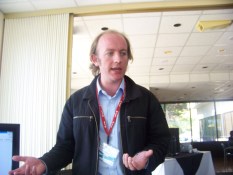 Christopher Dance, a researcher at Xerox’s lab in Grenoble, France, showed off a couple of technologies. The first was Hybrid Categorization, which combines the ability to search through both text and images in a way that helps zero in on the desired result more quickly.

The hybrid of visual and text databases results in a search engine that is more intelligent. It can, for instance, take your diary from a trip to Peru and combine it with the pictures you took. When it comes time to building a personalized blog, you can use the technology from Xerox to automate the process. For instance, if the word Cuzco appears in the text, the system will review your photos of cities and then conclude which photo fits with the words. It can do so because it can verify from the Internet what the city of Cuzco looks like visually and then compare that to your own photos. Dance said the text and visual searches combined yield much better results than searching separately with text or photos.

Dance’s second project is FactSpotter, a semantic technology that goes farther than typical search engines because it analyzes the semantic context of text to infer whether ambiguous words are being used as nouns or verbs. It also finds the person or object to whom a pronoun refers. If an article is about Steve Jobs and it mentions “he” a lot, the FactSpotter engine will note that the article is indeed full of references to the Apple CEO. Search engines that don’t use this technology would have less useful results.

The Seamless Document Viewer makes it easier to view documents on a cell phone or portable device. You can snap pictures of a document, upload it to the Fuji Xerox server, where it is then formatted for the screen that you have on your phone. You can then view the full-size document, using features such as zoom, scroll and panning. The viewer segments a document into regions so that the content can be presented in a way that makes the most sense, given what is viewable on the screen, said Lynn Wilcox, a research on the joint team from Fuji and Xerox. There were some neat features on this technology, which allowed you to view a small mini map that showed exactly which slice of a document you were seeing. But it seemed like a total stretch. Nobody really wants to read today’s documents on a cell phone, or so I think. 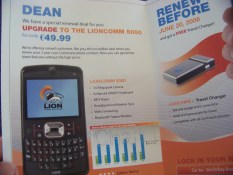 Personalized Communications Technology could allow retailers to specifically target an individual with sales offers. Think Amazon.com’s recommendation engine. This project at Xerox’s Webster, N.Y.-based XMPie software business unit is essentially a package that includes everything a company needs to target marketing collateral so that it’s more relevant to the recipient. It can include special offers for products that the consumer is know. Once the consumer responds, the system measures the effectiveness of the pitch. The results can then be used to apply the results for the next campaign.

“Print is not eliminated as a result of this,” said Ranen Goren, a Xerox researcher from a team that worked on the technology. “It just becomes smarter. It’s more effective, becomes greener, and you enhance your interaction with customers.”

The tool is already being used in the market. Customers can use different modules starting at $3,000 for a print-only version of the service. The price can go up as much as $50,000 or $60,000 for various web-related services. 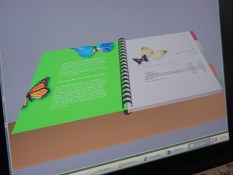 Higher Dimensions of Documents is the brain child of researcher Rob Rolleston. A researcher at Xerox in Webster, N.Y., he has a few different technologies that take documents to richer levels. His particular goal is to take what-you-see-is-what-you-get (WYSIWYG, the feature in word processors that shows you what your printed page will look like) to a new level.

He can take a Xerox annual report and render it in a 3-D view. Then he can edit the document and change around its look, all in a 3-D space that shows the effects of changes. You can add a spiral bind or comb bind to the report so that it looks better. Then you can order it and print it out. You can show someone what it looks like before you order a bunch of them. Rolletson thinks the technology could be useful to people who are self-publishing. It also makes it a lot easier to do complex fold-out specialty products, like the fancy foldable cards you see in gift card aisles. The technology is still in development and has not been commercially deployed.

“You can show them what it looks like at each step of the production process,” Rolletson said. “We can make new kinds of documents that nobody has ever seen before.” 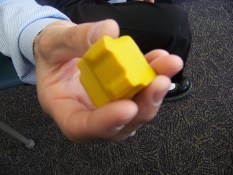 Solid Ink printing is an old but increasingly useful form of inkjet printing. First introduced in 1991, about 22 different products have been introduced over the years using them, said Steve Korol, manager of the division in Wilsonville, Ore. They work by using an ink which is a solid at room temperature. You melt the ink inside a printer and then the ink is jetted onto a drum. The drum rolls around once and prints the image on paper. The ink, a polymeric resin, feels like a crayon. The process is analogous to offset printing, which is used to print newspapers and magazines. There is no water to dry or solvent to evaporate and it thus has environmental benefits and the costs have come down. That is making it more attractive these days. A laser printer creaets 260 pounds of waste over time, compared to just 24 pounds for solid ink, Korol said. The disadvantage for now is in light fastness, or how long it lasts, compared to laser printouts. The solid-ink printers cost less than $1,000 now and can reach speeds of up to 30 pages per minute. 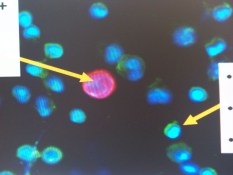 Rare cell detection: Richard Bruce is using modern DNA analysis techniques to find cancer cells at an early stage and to do important genetic tests on fetuses in a way that doesn’t endanger a pregnancy the way that amniocentesis does. The techniques for doing these tests today are either inaccurate or slow. Bruce’s technique borrows from laser printing. He labels blood with tiny markers dubbed labels. When the laser hits these markers, it gives off fluorescent light. Different colors have a different meaning in terms of what kinds of cancer cells are present in the blood. For fetal analysis, the test can replace amnio tests, which result in 1,500 miscarriages every year. This kind of test works OK as a simple test of the mother’s blood because cells from a fetus will “leak” away from the womb and make their way into the mother’s blood.

Environmentally friendly plastic: I was skeptical about this one, since the researchers from Fuji Xerox believe that they can save energy by making plastic out of biomass materials rather than oil-based products. As foes of ethanol note, it can take a lot of energy to make the biomass plastic too. But Kenji Yao and Michiaki Yasuno showed off how they are experimenting nonetheless with plastic parts that they are putting into copiers. They noted that roughly 62 percent of the carbon dioxide emissions related to the making of a printer are related to the manufacturing, assembly, and transportation process. So they made some biomass plastics from an alloy. The result was a plastic part with 16 percent fewer C02 emissions than the normal plastic part. The cost, however, is still about three times as much. 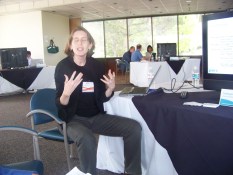 Intelligent document redaction: The last project I saw showed how researchers could create a system for automatically deleting words or blacking them out in documents for legal reasons. Researchers Jessica Staddon and Richard Chow showed how you could automate the process of finding sensitive information in a health document, such as references to HIV, before turning the document over to an opposing legal team. The system can search quickly through a document and find the letters HIV. But the system is also smart. It can go up on the Internet and find the words that are commonly used in the context of HIV, such as the names of medicines used to treat it. The system will then go through the records and expunge those words as well. Even better, the legal team on the other side can double check the work. They can, for instance, verify whether or not words that are important to their side were intentionally blackened out, even though there was no legal reason to do so. That’s because the system can set up an encrypted process where each side can verify and check whether the right words were removed.