In Australia, the husband and wife team behind Lumiflux has found a way to make a 50 year old technology seem new and, well, shiny. Electroluminescence, or EL, has been the technology behind your digital watch night-light and a series of small lamps from Sylvania for a long time. Until quite recently, though, EL was not bright enough for more widespread area lighting applications.

Ernest and Gabriella Kabay have developed EL panels that are flexible, easily cut to shape and 2-3 times brighter than previous generations of EL. This makes them ideal for outdoors advertising and signage.

In the US alone there are approximately one hundred million exit signs. Every year, these require thirty to thirty five billion kilowatt-hours, which costs two point eight billion dollars to produce and is the equivalent of four million cars on the road. Lumiflux EL signage would reduce that to 10% of current figures. In “exit” signs alone, there are impressive potential savings. The possibilities go much further, Kabay says. Outdoor advertisements, highway billboards, business signs and anything else normally requiring a large surface area to be lit up would all save an enormous amount of power by using EL instead of fluorescent technology.

ElectroCeramescent (ECer) lighting is a competing technology from the US, and a close relative of EL technology. ECer lighting co-developed by Meadow River Enterprises and Osram-Sylvania, in collaboration with the United States Department of Energy, can light up a billboard over forty times more efficiently than fluorescent lighting. An average fourteen-by-twenty foot billboard lit with fluorescent lights requires 550 watts of power — ECer brings that requirement down to 12.5 watts.

ECer lights are composed of a ceramic-and-steel structure that can be laser-cut to any desired shape. The sign itself is the light — which means that instead of lighting up an entire sign (“Exit”) with artificial daylight conditions, only enough light to contrast with the night is needed. This dramatically reduces power consumption and light pollution, while increasing visibility. Since it is made from steel and ceramic, durability is not expected to be an issue. “Property of…” signs may be expected to last 50,000 hours with little maintenance, even in harsh conditions and high-vandalism areas.

While EL and ECer lighting might save the world with their outdoors efficiency, they still aren’t bright enough for indoors lighting. For human working range brightness it is hard to do better than natural sunlight – which is, at the time of this writing, still free. To that end, the research and manufacturing giant 3M has patented a way to pipe daylight and Fluorosolar has found a way to take advantage of ambient UV light. 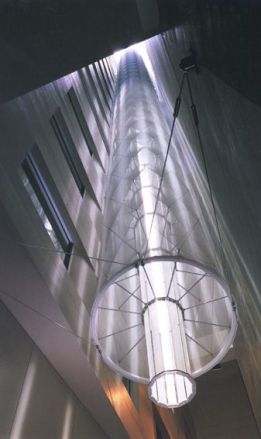 3M’s light pipe starts with a solar collector called a Heliostat. This is, essentially, a small domed structure which lets light inside but won’t release it. The Heliostat is aimed at direct sunlight throughout the day. From the Heliostat, it is transmitted through a tube with a highly reflective lining. These light pipes go from the roof (or any place with high sun exposure) to the area to be lit up. At the end of the pipe is a diffuser — and from the diffuser comes natural, electricity-free sunlight. During the day, this system provides free light. At night, artificial light can be introduced into the pipe or other high-efficiency sources could be used.

Fluorosolar takes a different approach. Instead of trying to capture the full spectrum light that we can see, FluoroSolar uses a flat panel to capture UV rays that are present even on cloudy days. This UV light is then sorted into red and green light before being piped to the interior of a building, where it is combined with artificial blue light. Red, green and blue together form the basis of what we call useful light.

The bonus prize with Fluorosolar is that no IR light is taken in or created in the process. With no additional heat being taken in or made, there is no extra burden on climate control systems. It is also the only light-piping technology that doesn’t require auxiliary light input for cloudy days, and is therefore the only realistic sun lighting in sad, rainy places like Seattle.

One technology that promises to do both indoors and outdoors lighting within the next few years is a plasma light bulb from Luxim, a company that recently took a $21 million funding. OK, so maybe their bulbs aren’t in the bedside table configuration, and maybe they won’t be anytime soon. It is, however, a plasma light bulb, a fact that demands the respect and attention from the tech crowd of our great nation. 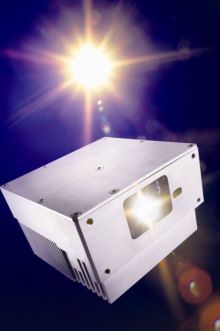 At around 140 lumens per watt, Luxim’s plasma bulbs are almost ten times more efficient than Tom Edison’s old invention. But despite their 30,000 hour lifespan, the current cost of the bulbs restricts them to use in projectors and commercial lighting. The upside is that in many commercial applications the Luxim plasma technology would allow for fixtures to shrink dramatically — a plasma bulb the size of a fingertip can out-perform a traditional bulb the size of your head — and consume less power.

LiFi, as Luxim calls it, is still in its adolescent stages. At the 2008 Light & Building trade fair in Frankfurt, Germany, Luxim marketed their plasma technology as fit for stage lighting, pavilion lighting, parking garages sporting events and everywhere else you need really big lights. Most notably, though, Luxim saw their plasma bulbs as being an ideal fit for hybridized light pipe systems — in this application, they claimed 30,000 hours of lifespan and 120 lumens per watt. Edison only managed 15. All this performance, though, is still in a large-lighting application package. This is not a problem for Luxim, though — the outdoors lighting market is big enough that they aren’t yet concerned with household products.