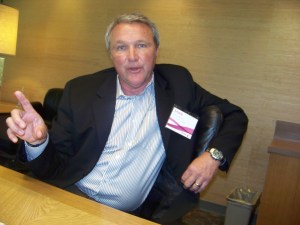 Xerox’s Palo Alto Research Center showed off 10 fascinating projects this week, everything from eraseable paper to solid-ink printers, but such moments always raise the specter of the past.

Xerox famously failed in the 1970s to commercialize the personal computer, instead letting others, such as Apple’s Steve Jobs, lead the way.

I met with Mark Bernstein, the director of PARC this week as Xerox showed off the fruits of its latest research. In our talk (see audio post), he said he’s determined not to fumble the future the way it did in the past. He talked about the spin-out of the research arm PARC from Xerox, and how it is structured to commercialize the best ideas. He says journalists always ask that question about that Steve Jobs visit and its aftermath. I couldn’t let him down.