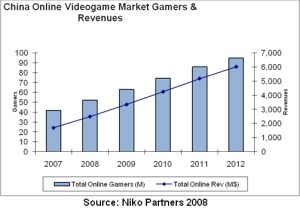 [Update: corrected some figures here] China’s online video game market is expanding rapidly, with sales expected to nearly quadruple from $1.7 billion in 2007 to $6 billion in 2012, according to a survey being released Friday by market researcher Niko Partners.

The market is expected to grow 32 percent 47 percent in 2008 to $2.5 billion, while the overall five-year compound annual growth rate through 2012 is expected to be 28 percent. That makes China one of the fastest-growing markets in the world.

“This market is attractive because it is leading the way for online games,” said Lisa Cosmas Hanson, managing partner of Niko.

One of the country’s hottest games is Blizzard’s World of Warcraft, which has more than 1 million concurrent users in China. Chinese players pay roughly $4.30 for 66 hours of game play. Most players play the game in China’s 185,000 Internet cafes. But the domestically created Fantasy Westward Journey game, an online game run by Netease, has held the No. 1 spot with 1.5 million peak concurrent users in 2007.

Niko estimates that 90 percent to 95 percent of packaged games sold in China are pirate copies. The pirated packaged software market actually shrank from 9.7 million units to 6.8 million units between 2006 and 2007, mainly because pirates are going to peer-to-peer networks to download games.

The Chinese market is unique in that most of the market is based on the PC, which is similar to South Korea but much different compared to the console-focused markets in Europe, Japan and the U.S. In fact, the Chinese government still has an official ban on sales of consoles because of concerns about moral corruption, Cosmas Hanson said.

“It’s dumbfounding, but the law hasn’t changed,” she said.

As a result, a gray market is blossoming. Sales of game consoles sold illegally in China hit 2.5 million units in 2007. Most of those consoles are Japanese-language versions, and the most popular consoles are the Nintendo Wii, the Microsoft Xbox 360, and the Sony PlayStation 2. The PlayStation 3 is less popular because it is more expensive and pirates haven’t cracked its Blu-ray discs yet.

“Even the pirates are going out of business,” Cosmas Hanson said.

Interestingly, only 113,000 of China’s Internet cafes are officially licensed and the government has stopped authorizing licensed cafes. Still, the number of unlicensed cafes is shrining growing, with the number now at 72,000.

Overall, based on surveys in a variety of Chinese markets, Niko estimates that the total number of online gamers in China was 42 million in 2007. That is expected to grow to 52.5 million in 2008 and 94.9 million in 2012.