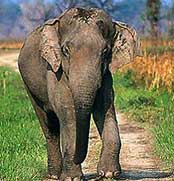 A merger between Facebook and Craigslist may seem like a pipe dream — but in India it’s already happening. The web community Sulekha has quickly grown to become India’s largest user-generated content site with 6 million users, a number set to double this year. Social networking features and classified ads take up equally big parts of the site.

The site targets Indians worldwide. India holds 60 percent of the users. Another 30 percent live in North America, which is gathering pace in many cities (more on that later). Almost every person online in India is fluent in English, so Sulekha knew from the start that competition from other social networks would be tough. There is no pure social network based in India that competes favorably with American social networks Myspace, Facebook or LinkedIn.

But Sulekha decided to expand beyond personal social networking. The network part of the site is divided in vertical sections like travel, news, sport and food. The idea is to provide useful content to anyone with interest in Indian culture and news. The Indian Premium League in cricket, IPL, attracts particularly strong interest with hundreds of people writing comments about it under a special “cricket caption”. Satya Prabhakar, CEO of Sulekha, says that the aggregation of social network content in vertical sub-sections makes it easier to attract advertisers who want to know their audience’s interests. General purpose social networks like Facebook and Myspace are all struggling to find a sustainable advertisement solution. 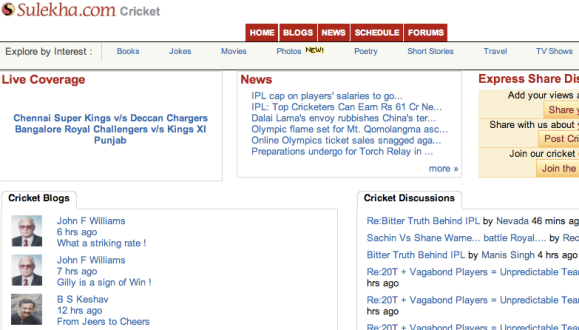 Sulekha will not disclose its revenue but says it’s growing by 75 percent this year, making the company profitable at the operational level. Half of the revenue comes from advertising on the social network part of the site. The other half comes from classified ads, where currently about 20,000 small businesses have paid for search words. In the U.S. a majority of such small businesses have their own websites and many would use Google’s Adwords advertising tool. In India, online advertising is a brand new world.

The major share of Sulekha’s 450 staff work in sales and visit the Indian companies to give them their first introduction to online advertising. It has apparently paid off, since Sulekha now claims to be the largest online classified site in India’s eight biggest cities — Mumbai, Kolkata, New Delhi, Chennai, Bangalore, Hyderabad, Ahmadabad and Pune. About three quarters of visitors use the classified ads section of the site.

Social networks in emerging markets was a big discussion topic at the Web 2.0 Expo in San Francisco recently. A big question is whether the sites will be open to external application providers adding their widgets.

“Our ambition is to support Open Social [the social network initiative sponsored by Google and others],” Prabhakar said. “When that is in place, any gadget can be used on Sulekha. We’re completely determined to keep it open.”

The site has started to attract non-Indians with a taste for the Indian culture, currently corresponding to about 5 percent of total users. But Sulekha will not dilute its Indian flavor to capture a greater audience, Prabhakar said.

“You can’t create a social community for everyone in the world,” he said. “The more focused you are, the stronger the community. People have to have a shared context.” 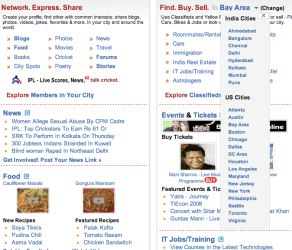 “India lacks experience in building big sustainable companies. This is where an American investor can help us bring focus and discipline”, Prabhakar said.

But the big potential to scale usage remains in India, where 93 percent of the 1.1 billion population is not yet connected to the Internet. Internet penetration in India is only 7 percent, compared to 61 percent in the U.S., according to Morgan Stanley Research TMT database, ITU, and Euromonitor.

“One of the key constraints in India is that Internet connections are not growing as fast as we were hoping for. That will change,” Prabhakar said.

Despite the low penetration, India already has 80 million Internet users which makes it the third largest Internet market in the world behind the United States and China. Total users will grow by about 40 percent this year, according to Morgan Stanley, almost double the growth rate in other developing Internet markets like China and Brazil.

“The opportunity for additional broadband penetration combined with a sizable middle class with tremendous spending power makes today’s investment landscape in India extremely attractive”, said Promod Haque, MP of Norwest VP, who also sits on the board of Sulekha.

He thinks that the spread of smart phones will be the most important growth factor for Sulekha going forward. The total wireless subscribers (GSM, CDMA & WLL(F)) base stood at 250.93 million at the end of February 2008, according to The Telecom Regulatory Authority of India. Mobile subscriptions will grow by about 80 percent this year, according to Morgan Stanley.