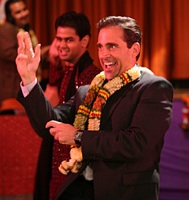 Having just moved into a new place, I have no television yet. Normally I’d turn to iTunes to catch my favorites, but the problem is that many of those shows are on NBC — the same NBC that famously cut ties with iTunes six months ago. Instead, I visit the NBC and Fox’s free video streaming site Hulu, which is exactly what NBC wants. So why does the company keep teasing us with the possibility of a return to Apple?

For example, NBC is now offering iPhone users the ability to stream select shows for free to their devices, Silicon Alley Insider has uncovered. When it actually works, the quality is awful, but still, why the olive branch to Apple supporters?

Another example: Yesterday, it was revealed that NBC was offering several of its shows on the UK version of iTunes. If you’re attempting to take a stance against iTunes, does it really make sense to partner up with the service again, even if it is in another country?

Back in January, when the writer’s strike was still going on, NBC chief executive Jeff Zucker told the Financial Times that NBC wants to be back in business with Apple. Everyone assumed that comment meant it was a forgone conclusion that the two would get back together, yet all we get are teases.

To add insult to injury, NBC also announced yesterday that it was teaming up with Microsoft to bring its content to the Zune portable media player. The per-episode price? $1.99, the same as iTunes. (Though, unlike Apple, Microsoft is reportedly open to shifting the price based on varying content.)

Perhaps NBC is waiting to see how successful the Apple TV device will be with Apple’s new movie studio deals in place. Or perhaps Zucker just wants to make Apple chief executive Steve Jobs squirm a little more as the Hulu’s positive reviews keep coming in.