While social music sites are taking off and the search for a new and relevant business model for the music industry is on, Torian Wireless is reaching millions of users the old-fashioned way: radio.

Torian Wireless recently re-launched MiRoamer, an online portal where users can select from thousands of internet radio stations, and customize them from a single interface. The service is a sort of hybrid Internet radio portal/search engine/custom playlist creator. And users with wireless access can use the site to access the same radio stations from their car, phone, or computer. This may not seem useful now, but with the release of the next-generation iPhone and the billion-dollar investment in Wimax today, it’s safe to say mobile internet access will soon skyrocket.

The site’s relaunch features a redesign as well as improvements in usability, better adherence to browser standards, and sub-modules that make the site a bit more social — miBuddies, miPicture, and miVideo. Users can now also browse by location and genre, a feature previously unavailable.

According to a recent study by Arbitron and Edison Media, more than 33 million Americans over the age of 12 listen to internet radio on a weekly basis, an increase from 29 million a year ago. MiRoamer hopes to attract those millions of users by aggregating over 10,000 “unique” radio stations and by giving users the ability to add custom stations as well.

After gaining decent traction, the company plans to sell targeted advertising, insert audio-based 15 to 30 second commercials, or charge consumers in a pay-for-use model, although, frankly, I doubt the latter will work.

MiRoamer is also targeting the business-to-business market by offering licensing to consumer electronics device manufacturers (OEMs). The OEMs will pay a license fee to use the software in internet-capable devices. The company also offers these OEMs access to statistics of when and how device users listen to MiRoamer.

The company’s competitors include current providers of internet radio portals — VTuner and Reciva — both of which offer internet radio-enabling software. Reciva also markets software to OEMs. MiRoamer’s differentation is the single interface for multiple devices, which its competitor can’t do, and the customization abilities it gives to the OEMS it partners with. So the company’s success is really dependent on the widespread adoption of its software by OEMs, as well as the speed of development of WiMax and 3G in the US.

Thousands of users use services like iTunes or “iPod killer” Slacker Portable, a mobile Internet radio device, to peruse Internet radio, so miRoamer will have to convince users to switch from the vehicle they currently use to listen to Internet radio. A single user interface could work especially well with users who don’t want to purchase new devices, and listen to the same Internet radio stations, whether in the car, mobile, or from their PC. Also, since miRoamer licenses its technology to OEMs, it’ll have an easier time with this if the software comes built in to mobile devices.

Parent company MiMedia is a subsidiary of Melbourne-based Torian Wireless, founded in 2003 by George Parthimos, MiRoamer’s CEO. The company is seeking $3 million in a first round of funding.

The company is not yet profitable, although it projects revenues just short of $1 million in 2008 and expects to break even in the second quarter of 2009. 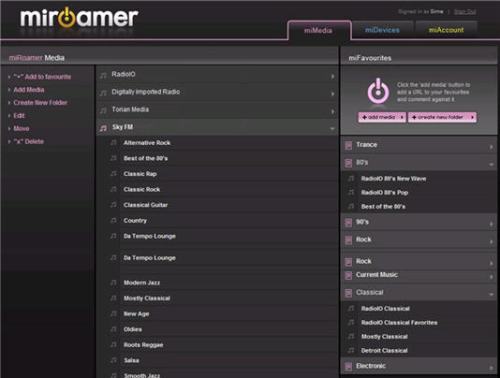