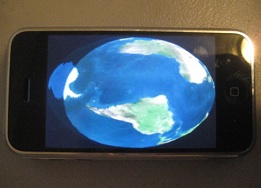 If Apple intends to sell 10 million iPhones before the end of the year, it is certainly going about it the right way. First, it is releasing a newer, sexier version that will run on the faster 3G network (I have yet to talk to someone who says that they aren’t getting one, especially if it really is $199). Second, it is rapidly expanding into new countries — which of course means new customers to sell the device to.

The iPhone’s trek around the world (which may or may not happen in 80 days) continues today with word that the largest mobile network operator in Latin America, America Mobil, will begin selling the device in Mexico and other parts of that region later this year. The company offers Apple potential access to over 152 million subscribers in 16 countries.

But wait, there’s more. Another report claims French telecom Orange is in discussions with Apple to sell the device outside of France (where is has sold the iPhone since earlier this year). Two countries named as candidates in this expansion are Spain and Poland with others being possibilities as well.

These countries would join Canada, Australia, the Czech Republic, Egypt, Greece, Italy, India, Portugal, New Zealand, South Africa and Turkey as recent additions to Apple’s roster of countries that are iPhone compatible. Still no word however on a deal with the real jewel in Apple’s eye, China.