Remember the game Risk? You know, the one with the world map where you battle other players to gain the most terrain and literally take over the world? Yeah, fun game. Apple may think so too, and thanks to a new graphic (below) made by a commenter in The Mac Observer Forums (and found by Apple 2.0), you can really see it.

All of the areas in red are where Apple has or will soon penetrate the market with its game-changing mobile device. This red area is expanding quickly as Canada, Australia, the Czech Republic, Egypt, Greece, Italy, India, Portugal, New Zealand, South Africa and Turkey have all been added recently. Likewise Argentina, Brazil, Chile, Colombia, Dominican Republic, Ecuador, El Salvador, Guatemala, Honduras, Jamaica, Mexico, Nicaragua, Paraguay, Peru, Puerto Rico and Uruguay all may be on board thanks to Apple inking a deal with America Movil. And don’t forget about the rumored Spain and Poland expansion.

Incidentally, the two countries perhaps most associated (at least in the past) with being “red”, China and Russia, are not yet red on this map. Expect both to succumb once the 3G iPhone hits. 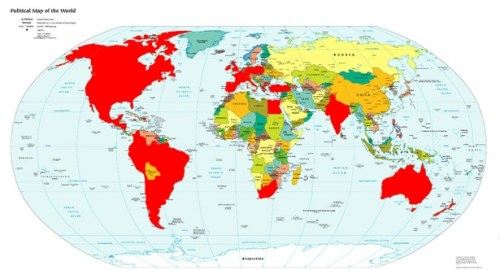