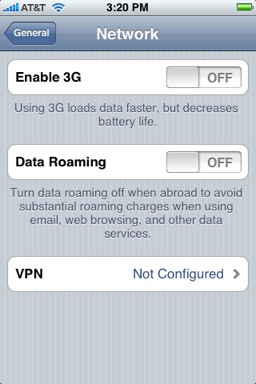 The hype and speculation around the 3G iPhone are mounting quickly. Yesterday, it was uncovered that an “Enable 3G” button was part of the latest beta firmware update for the device. While Apple has yet to officially comment on the rumored-to-be-impending release, this is certainly one of the clearest signs that it is definitely coming soon. But how soon?

Rumors are flying around the Internet that Apple will launch the device earlier than expected — with some now even pointing to this month. There are a couple reasons behind this.

The first is that iPhone shortages are cropping up. Various parts of the U.S. and U.K. are out of stock (the device is completely sold out in New York City), with seemingly no refreshment in sight. Now, even Apple’s own online store is out of the device.

This, when added to the earlier rumor that Apple would release the 3G iPhone in May and save its WWDC convention in June for the announcement of a different, new device, have some speculating that we may see a very quiet roll-out of a 3G iPhone within the next couple weeks.

But let’s take a step back. We know that AT&T is circulating a memo to employees telling them not to take vacations between June 15th and July 12th. Unless this rumored new device was also utilizing AT&T in some way, it seems a lock that the 3G iPhone will be released in that time frame.

Also, unless Apple considers the 3G compatibility to be an incremental update, would the company really do a low-key Tuesday morning roll-out of the device without some large event? Several supposed first-hand accounts of the device suggest it will not simply be a small upgrade to 3G technology, but that the device will be completely reworked with several new features such as GPS and video capabilities.

Perhaps most telling, however, is that the iPhone 2.0 software is not due until June. Does anyone really think Apple is going to launch the 3G iPhone without the new software to utilize some of its features?

The most likely scenario here is the principle of Occam’s Razor. To paraphrase: All things being equal, the simplest solution is the best. The original iPhone is probably nearing the end of its life-cycle. Apple may have slightly miscalculated the number of first generation iPhones it would need prior to the launch of the second iteration, which, if they are to come out in June, are clearly now being manufactured.

If that is true, it would also suggest once again that if AT&T is going subsidize the price of the iPhone down to the rumored $199, it will be the 3G model and not versions of the older ones, which are most likely no longer going to be sold.

The buzz around the 3G iPhone is already pretty amazing. I’ve received no fewer than five emails this week from non-tech friends and family asking for anything I know about the device. With so much rumor and speculation floating around it’s hard to know much of anything for certain. Still, I would stick by the assessment that we won’t see the device in May and that instead it will be unveiled by Steve Jobs during his keynote at the WWDC on June 9. He’ll then probably announce its availability within a few weeks, and the lines outside AT&T and Apple stores will begin to form.