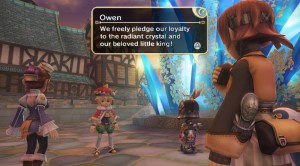 Independent developers of video games are a downtrodden lot. Like independent film makers, they only get so much recognition from the big guys. But that’s been changing as more voices decry the dearth of creativity in big budget games.

Nintendo is the latest to recognize the problem and is launching its WiiWare downloadable games platform today as the antidote. Developers can now submit indie games to Nintendo, which screens the titles and puts the best up for download via the Wii game console’s wireless Internet connection.

The company says this “open playground for creativity” will tear down the barriers that stop developers from making creative titles outside the mainstream market. The platform is open to any professional developers, from the smallest of companies to the big game publishers.

Nintendo already makes its own library of past titles available as Virtual Console titles. The new games are easy to download. The players goes to the WiiWare section of the Wii Shop Channel, redeems Wii points to purchase a game, and starts a download. Nintendo has reviews of WiiWare games available and fans can rate the quality of the titles.

The inaugural line-up includes: “Final Fantasy Crystal Chronicles: My Life as a King” by Square Enix, at a cost of 1,500 Wii points, or about $15. (Pictured). Others include “Lost Winds” from Frontier Development, for 1,000 Wii Points; “Defend Your Castle,” from XGen Studios for 500 Wii points; “Pop” from Nnooo (yes, that’s really how you spell the name) for 700 points; “V.I.P. Casino Blackjack” from High Voltage Software for 700 points; and “TV Show King” from Gameloft for 1,000 Wii points. Lost Winds has been praised for its creativity, as the player uses the Wii remote controller to push an on-screen character with the force of wind.

It isn’t much of a start, with just six titles. Microsoft has considerably more titles available on the Xbox 360 Arcade and Sony has a lot of titles on the PlayStation Network. Microsoft in particular is making it easy for developers to create indie games that run on a variety of its platforms. More than 800,000 people have downloaded Micorsoft’s XNA Game Studio tools to create games that can run on the Xbox 360, the PC, and the Microsoft Zune player. Microsoft launched the tools program about 20 months ago, so Nintendo is really late in this respect. But Nintendo’s move is the latest endorsement of the trend toward appreciating the value of indie game development.

The move is also recognition that bite-sized gaming is becoming a new habit for people who don’t have the patience for time-consuming games — or the money to pay the $50 or $60 price tags.

Platforms such as WiiWare are a new point of entry for start-ups in the video game console business. It’s important that they exist to counter the flow of talent to the web, where it’s increasingly easy to post new games at places such as Kongregate. Tom Prata, a senior director of product development at Nintendo of America, told MSNBC that 80 percent of the titles are coming from developers who haven’t developed games for Nintendo platforms before. He said there are some 100 WiiWare titles in the works.