VentureBeat and Steve Newcomb (the event’s co-founder) held our first joint SF Green cleantech event last night. If you didn’t make it, here’s the agenda for all the fun you missed — Tesla Motors brought an electric sports car for people to try out, several cleantech startups showed off their wares and business cards and drinks were exchanged all night long. 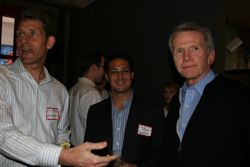 In the mobile post below, Lane responds to Matt’s question about critics of hybrid-electric cars. Specifically, Matt asked him whether he agrees with Vinod Khosla, an investor in solar, ethanol and biofuels. Khosla told us last year that hybrid-electric cars won’t make a significant dent in carbon emissions, and are more about assuaging guilt than actually saving the environment. Lane’s answer: Khosla is both right and wrong. Yes, using greener fuels is more likely to make a substantial and immediate impact on carbon emissions, but that doesn’t mean electric cars aren’t a big and necessary part of the solution too.

(Sorry for the sometimes-crummy audio quality. If it sounds like I’m recording in a loud, crowded room, well, that’s because I am.) 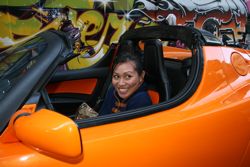 Matt also interviewed Tesla’s Vice President of Marketing Darryl Siry, who gave us an update on how production is going. There are five Tesla Roadsters out in the world right now, and the company hopes to increase that number to 300 by the end of the year. Tesla is also raising a fifth round of venture funding, which should provide all the financing the company needs until an IPO, planned for next year. Siry wouldn’t get too specific about the IPO timing, but we’ll know it’s close “when we stop talking about it,” he said.

Siry just told us this morning that Tesla has added a big name to its board: Larry Sonsini, considered the most powerful lawyer in Silicon Valley. That’s an impressive addition, and we can’t help but note that Tesla is bringing a lawyer on board just as it’s launching a lawsuit against Fisker (yes, the same Fisker Lane invested in) for alleged theft of design ideas and trade secrets. Of course, Sonsini has some problems of his own, namely the backdating lawsuit against Brocade Communication’s board of directors, including Sonsini.