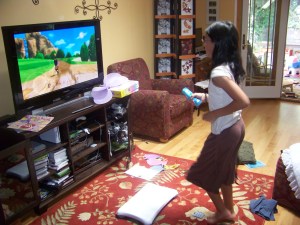 Saturday morning games have replaced cartoons in my household. And this weekend, the kids and I are giving Wii Fit a whirl. This is the new game from Nintendo whose aim is to get gamers off the couch and exercising.

While Microsoft and Sony are in the arms race to give hardcore gamers ever-improving eye candy with shoot-em-up games in highly realistic 3-D worlds, Nintendo’s Wii is aimed at expanding the audience for games to nongamers. Wii Fit is yet another in a series of games that show that creatively redefining what a game is — something Gabe Zichermann calls Funware — can lead to a breakthrough hit.

Wii Fit has already sold more than two million units in Japan and it debuts on Monday (at the Nintendo store in New York only, then across the country on May 21) the U.S. At $89.99, it should keep the cash registers ringing for Nintendo, after last month’s big Wii hit “Super Smash Bros. Brawl,” and it just might hold at bay the rivals who are benefiting from the record sales of “Grand Theft Auto IV,” which is not available on the Wii.

The Wii Fit game comes with a Wii Balance Board, an ingenious little device that looks like a scale for measuring weight. Normally, you’d think it would take a lot of 3-D depth perception and motion capture to record the actions of a body in motion. That’s what a lot of companies such as 3DV and PrimeSense are doing. But the Wii Balance Board is a new accessory for the Wii that costs a lot less and relies on the simple mechanics of scale springs to measure body movement.

The board has a lot of springs underneath it, while the typical scale has only one. Those springs can detect which way you’re leaning when you’re standing on the Wii Balance Board. It then calculates your body position in order to figure out what you’re doing and where you are moving. This simple mechanical device, connected wirelessly to the Wii console, is yet another example of less-is-more design from Nintendo, which is a close rival to Apple in the care it builds into the products. Indeed, Nintendo started working on the Wii Fit game even before the launch of the Wii in the fall of 2006. It has taken its time with the design of the game and the Wii Balance Board — and it shows. There has been a long history of failed exercise-gaming devices, as this article notes. But Nintendo has nailed it.

The game comes with a complete campaign aimed at creating a personalized instruction plan for you to lose weight and reach your fitness goals. Upon starting up, it takes your Wii avatar (your own persistent character identity on the Wii) and asks you to enter your physical data. You enter your height, age, and stand on it so it can record your weight. Then it calculates your body mass index. You can then create a fitness goal. If you say you want to lose six pounds in two weeks, it tells you that the standard healthy goal is to lose no more than three pounds every two weeks.  That helps keep your weight loss goals in perspective. It also calculates what your corresponding BMI measurement would be if you hit your goal.

And yes, I’m overweight and borderline obese. I’ve got a long way to go, but I can keep trying to hit this target of losing three pounds every two weeks. You can also personalize the game for each member of the family. My kids are fortunately all in the normal range. But the Wii Fit program can give them different goals of gaining strength, beyond just losing weight. 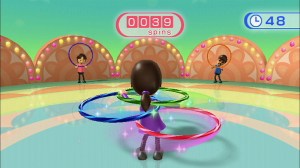 Some people have complained that the game calls people fat. It’s not true. It uses the same terminology as in the BMI index, i.e. “obese.” Reggie Fils-Aime, president of Nintendo of America, said in an interview earlier this year that the game has to balance being fun and being accurate, so that people can set realistic goals for their own physical fitness improvement.

The kids have been playing it all morning. My oldest just ran in place for two miles. (If you like on the sofa and just shake the Wii remote, you can fake running and fool the game). The game records how much time you put into it each day. The good thing is that exercise is no longer a chore. You can now play your way to better fitness. You start out with just a few aerobic games: a Hula Hoop twirl, where you spin your hips as much as you can; a one-person or two-person jog through a scenic park; and a step class where you step on and off the board. While jogging, if you go to fast, your Mii character falls down. 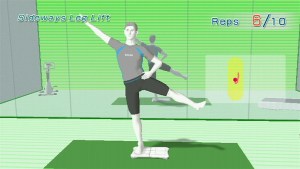 You can also do yoga, strength training, and balance exercises. As you make progress, you can unlock more fun games. One of the best balance games is where you play a soccer goalie and butt your head against soccer balls as someone kicks them at you. There are more than 40 activities. There are other third-party games coming for the Wii Balance Board as well, including “Skate It” from Electronic Arts, which has made a skateboarding game; Bandai-Namco has also released an elementary snowboarding game, “Family Ski,”  in Japan.

This kind of game can do a lot for the industry. It can crush the stereotype of couch-potato gamers, bring more kids and women into games, and maybe help me drop a few pounds.