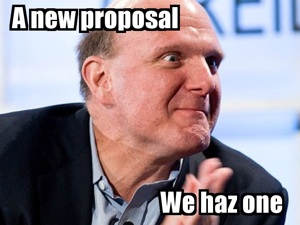 Well that didn’t take long. Barely two weeks after walking away from its proposed deal to buy Yahoo, Microsoft released a statement today that the two sides were back at the negotiating table “in light of developments.” Those developments are billionaire financier Carl Icahn’s hostile actions to replace Yahoo’s board and word that Google and Yahoo are once again talking about extending their search advertising partnership.

Microsoft is not proposing a full takeover of Yahoo at this time, but apparently has a proposal to buy at least part of the Internet giant. Not surprisingly, word is that Microsoft wants to merge its search advertising business with Yahoo’s, thus blocking any potential Google deal to do the same, according to BusinessWeek.

Such a deal would seem to make more sense for both sides on the surface. Microsoft would get what it wants, a bigger piece of the search advertising market, while spending a lot less money and presumably not having to go hostile to do so. Yahoo, meanwhile, would avoid being fully taken over by Microsoft, would avoid Icahn’s wrath and would get some money and do so while using its brand to build a better competitor to the number one force in the industry: Google.

Long term, it’s still very questionable if even this deal would be very beneficial to either side. Google simply shows no signs of slowing down.

There is also some interesting wording in the very brief statement:

Microsoft is not proposing to make a new bid to acquire all of Yahoo! at this time, but reserves the right to reconsider that alternative depending on future developments and discussions that may take place with Yahoo! or discussions with shareholders of Yahoo! or Microsoft or with other third parties.

In other words: Don’t mess around with us this time Yahoo or we’ll back Icahn.

update: Yahoo has of course responded with its own release — this one even more vague than Microsoft’s:

“Yahoo! has confirmed with Microsoft that it is not interested in pursuing an acquisition of all of Yahoo! at this time. Yahoo! and its Board of Directors continue to consider a number of value maximizing strategic alternatives for Yahoo!, and we remain open to pursuing any transaction which is in the best interest of our stockholders. Yahoo!’s Board of Directors will evaluate each of our alternatives, including any Microsoft proposal, consistent with its fiduciary duties, with a focus on maximizing stockholder value.”

Reads a lot like: “We’re not being bought, but we will do a deal.”