There are various arguments about how to preserve email against the onslaught of social networks, and help it become a next-generation communication tool. One, exemplified by startups like four I covered last year, is that email should be like a social network, aggregating in other forms of communication like chat and helping connect to and track people.

Another line of argument, the one ClearContext is following, is that email’s most dedicated users are simply overwhelmed; the focus should be on the flood of incoming communications. ClearContext is a San Francisco startup that, like Xobni and others, builds its software atop Microsoft Outlook. The company has a multi-prong strategy that sets priorities on new messages and helps file them to folders or project views.

I covered those attributes last year in a previous ClearContext review. What the company has added are features that further break up email into categories, and lower the daily chaos involved in digging through an inbox. A good example is the new Facebook feature. Any messages sent from Facebook will be automatically shunted to a custom-built “folder” that categorizes them and makes them easy to browse when you’ve got free time, minimizing the distraction. LinkedIn gets the same treatment. 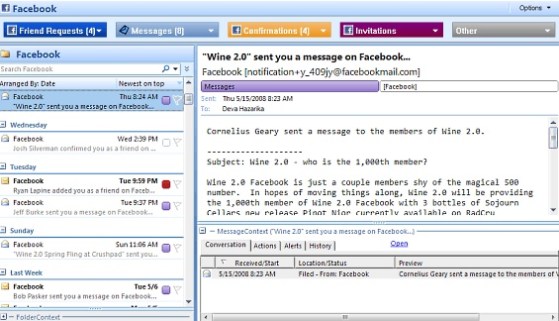 For the larger mass of daily emails that aren’t so easy to categorize, there’s automatic analysis that color-codes messages by importance and helps to quickly sort them into different folders, a useful feature for project managers. And another new tool, the “Attachment Explorer”, helps split off attachments like documents and pictures for easier access (Xoopit does the same thing for web mail). Some other features are listed here. 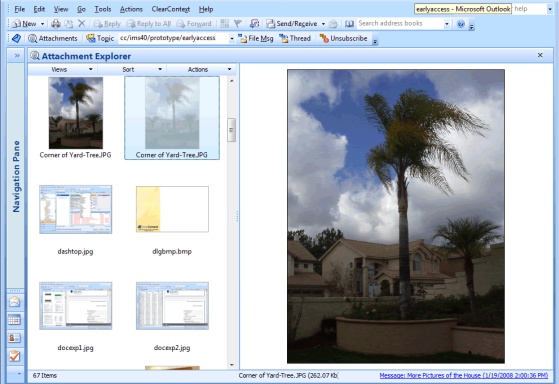 The idea for ClearContext is to cut down on the number of clicks, and the amount of thought, required to deal with email. What’s interesting to watch here are certain concepts that are becoming standard across the various approaches to email — like the attachment explorer, which new email startup Zenbe also has.

However, these startups are also fighting an uphill battle to get recognition and acceptance. Most of their potential users are heavy communicators in the business world, but few of those people are even aware that help exists. According to ClearContext’s CEO, Deva Hazarika, the space is still nascent enough that companies like Xobni can’t even be considered competitors. “Anything that raises awareness that there’s stuff out there that can help people manage their email is a positive for us,” says Hazarika, who often has to start from scratch in explaining email software to potential clients.

If you want to try out the newest version of ClearContext for yourself, the first couple hundred VentureBeat readers can sign up by going to the homepage and using the invite code “venturebeat”.