KnowNow, a startup that sought to deliver RSS services to large companies, is looking to sell after failing to build a viable business.

The San Francisco company started winding down about two weeks ago, VentureBeat has learned, after three different CEOs took turns a the helm but failed to build a business out of the new technology.

A source close to the company says the underlying technology is valuable, and he expects a sale.

RSS grabbed a lot of attention among businesses two years ago, when techies began proselytizing the wonders of the protocol. RSS could let you subscribe to almost any kind of data. While consumers can use it to track their favorite news sources, there’s so many other uses for businesses: If your sales person kept a log of their sales, you could subscribe to their logs via RSS. If your biz development person tracked their deal progress, you pull their logs by RSS too. If your IT department logged traffic spike data, you could get that, and so on. To top it off, you could pull it all into a spreadsheet on the fly and mix it all up, giving you — at least in theory — a more efficient, quicker way to get an overview of your business and make better decisions.

Two years ago, when KnowNow raised $13 million in fresh capital to sell RSS services for the enterprise, we expressed surprise at the large amount of capital. RSS platforms should be relatively cheap to build. At the time, chief executive Todd Rulon-Miller explained KnowNow needed the cash because it was building products for companies requiring robust, secure software, such as banks. Wells Fargo, for example, bought one of KnowNow’s $75,000 sever licenses, he said. He also said at the time that KnowNow had ten other large customers and that deals would be announced, but apparently the customers never coughed up real dough. 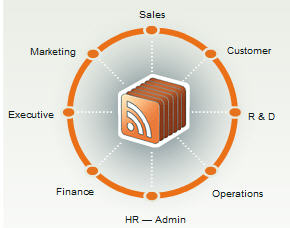 The RSS strategy, however, was just the last in a series of turns by the seven year old KnowNow, which raised more than $50 million. It was backed by big-name valley venture firm Kleiner Perkins, among others.

I’ve tried reaching KnowNow and Rulon-Miller, but have yet to hear back.

[Update: I’m told KnowNow made $7.5 million in revenue last year, though I haven’t confirmed that with the company.]

NewsGator is another company seeking to serve businesses with RSS services, and appears to be doing somewhat better, having integrated with Microsoft’s Sharepoint to create an add-on product. We’re told large software company SAP recently replaced KnowNow’s product with NewsGator’s. Attensa is yet another company working in this area.