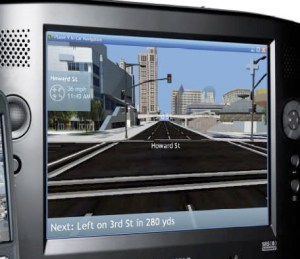 Can someone build a GPS system that’s not a boring necessity and instead is a fun way to socialize with your friends? That’s what Planet 9 Studios, a San Francisco startup, wants to accomplish with RayGun, a GPS navigation and social networking application. It is already available in 2D and is about to launch a 3D version.

With RayGun, you can create an avatar to represent yourself, and move around in the application. You can also share routes, text chat, share photos and video, and even talk to each your friends over VoIP (Voice over Internet Protocol).

RayGun’s strength is the quality of its 3D graphics, which turns navigation into an almost game-like experience. But 3D graphics can be also a weakness: Do users want advanced graphics on the small screen of cellphone or other navigating device?

The big question for Raygun is whether social networking features are a useful addition to a navigation system. When you’re using GPS, you’re often in a rush, so I’m not sure how often you’ll have time to send extra messages. And if you want to socialize with your cell phone, you can already do it with companies like Loopt, a social mapping service where users can share locations with their friends.

Planet 9 Studios won’t be selling directly to consumers; instead it’s negotiating with mobile phone suppliers and network carriers about delivering RayGun in their products, Colleen says. Colleen adds that RayGun will have the only server, GeoFeeder, that can stream 3D data to cellphones; although that’s only needed with less advanced cell phones that don’t have enough storage for rich 3D-data.

So far, RayGun has been available in testing mode, and it’s used by the U.S. Army, Boeing, AT&T and Sprint in tracking people in emergency situations. Last month, Planet 9 Studios was named as a finalist in TeleAtlas LBS Innovators Series Event, and was picked by Dow Jones to the top 10 startups developing wireless products.

Founded in 1991, Planet 9 Studios is already well-known as a supplier of high-quality 3D city models and data which are used in games, movies, GPS devices and cell phones. For example, Planet 9 data is used in Magellan’s Maestro Elite 5340-navigation system, and its models were used as backdrops for the movie Zodiac.

In the 1990’s Planet 9 Studios had clients such as Microsoft and Apple, but the company lost its big customers after the dot-com bubble burst and had a low profile for a while. Now it’s trying to make a comeback by bringing 3D products to mobile platforms. So far the company has been privately funded but now it wants to raise $8 million within the second quarter of 2008.