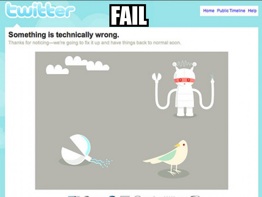 It was sure nice of Twitter to respond to a post on TechCrunch about Twitter being down — again. The question I have is: Where are these updates hours beforehand, when the service is actually down?

I know there are some often vague and usually repetitive updates on the online customer service site Get Satisfaction, but I never check there because I’m not directed to check there by any error message. Judging from the after-the-fact tweets (Twitter messages) from many of my friends and followers, they don’t know to check there either. By default I check the Twitter Blog and that usually has no updates. I’m sure it’s a hectic time for all involved but, please, think about the users.

Some of those users are apparently planning a boycott (cutely dubbed a “Twit-out”) of the service tomorrow in protest of its downtime issues. The goal is to show those running Twitter that its users make the service what it is. They organized this action on content conversation service FriendFeed, which also pipes in Twitter data — when it’s actually available. There is definitely a trend in Twitter users flocking to FriendFeed to talk about Twitter when it’s down.

Despite my annoyance with the service, I’m not ready to partake in a boycott just yet. I simply still find it too useful and I have a high tolerance for pain. (Its woes also give me something to write about, right?) However, I would advise Twitter to be careful. While I and other users who are addicted to the service may not walk away anytime soon, if other less active users who we follow start leaving, it will make the service less useful. This will prompt others to use it less and less. Eventually such a chain reaction will lead to a slow death for the service.

Every service has some amount of downtime, but Twitter’s woes are amplified by a few factors:

Today’s mishap was apparently caused by a database failure during a routine update this afternoon. The meltdown Twitter had a few weeks ago was also brought about by changes made during an update. This is very troublesome and suggests poor planning.

I hope Twitter’s new round of funding is wrapped up and it can hire some new personnel who can correct these issues. Otherwise, it may be time to sell to someone who can. If Twitter were a public company, I might just go all Carl Icahn on it. (Of course for that I would also need money — and a replacement board. Who wants in?)