Social web browser Flock has garnered a lot of hype since its release in 2005. It’s also won a lot of fans. Both likely played a role in its new $15 million fourth round of funding announced today. The round was led by Fidelity Ventures, with all previous lead investors, including Bessemer Venture Partners, Catamount Ventures and Shasta Ventures, participating.

Impressively, this round of funding actually surpasses all of Flock’s previous rounds combined.

This money will be used for the usual purposes such as research, development and marketing. An emphasis will be placed on global expansion as well as the company sets its sites on the 230 million members of social networks globally.

Flock is a browser just like Firefox or Internet Explorer except that it has built-in functionality for various social networks on the web. Say for example you sign in to your Flickr account, you can have Flock remember your info and keep it open in a sidebar tab and update you when your contacts post new photos. It also works with more traditional social networking sites as you might expect such as Facebook.

According to the company, since January of this year Flock’s user base has increased by more than 250 percent while its revenue has risen by more than 400 percent. As we’ve reported previously, Flock makes money thanks to a deal it has with Yahoo to use its search technology. This is similar to the deal Mozilla’s Firefox browser has with Google.

Flock is currently testing out its 1.2 Beta version of the software, which includes Digg integration. This is a pretty good idea and certainly hardcore Digg users will go crazy over it. While I don’t think anyone can accuse the browser of not looking nice, I still find it too slow for my tastes in what I use a web browser for: browsing the web.

Another service, Minggl, shares some similar social functionality of Flock but does it via a Firefox or Internet Explorer plug-in rather than an entirely different browser. 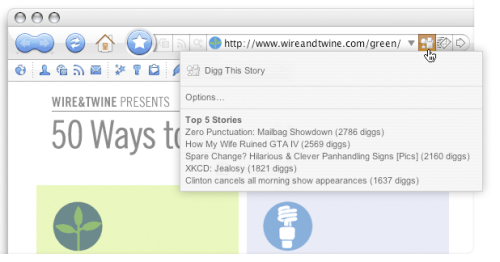