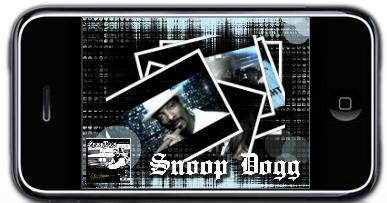 One day soon, with the help of Moblyng, you’ll likely be able to stream music playlists from social networks to your phone.

In the meantime, though, you can use Moblyng to watch any number of things on your mobile device — a YouTube video or to put Slide slideshow widgets from MySpace or another social network.

Then, the Menlo Park, Calif. company’s technology scrapes profile on social networking sites and other applications of your choice and recreates Flash content as video or as JPEG-format images. Once you’ve used Moblyng to scrape content, you can send the scrapings to your friends via mobile text messages. See sample screenshot of a Snoop Dogg slideshow, above.

Incidentally, the company originally developed this technology when it was a direct competitor to social network slide show makers such as Slide. The company, until now known as Fliptrack, originally let you create advanced slideshows that matched music in time with slideshows — Animoto has more recently come out with a similar product. Facebook users can still use Moblyng’s slide show application here.

Moblyng realized the technology it had created for Slideshows could also be used to convert Flash to mobile. Personally, I’ll find the most use for Moblyng when I can use it to stream music playlists from MySpace, such as those offered by Imeem. Moblyng says legal issues need to be worked out before it can start streaming music — but it does have the technical ability to do so. Note: Moblyng already does license some music, so some slideshows with music will also play that music within its mobile renditions of applications.

The company has raised $5.7 million from Mohr Davidow Ventures and Deep Fork Capital.