A lot of talk in recent weeks has shifted towards the “noise” on services such as Twitter and FriendFeed. Some users are simply overwhelmed by how much is going on within these services and how much attention is required if you want to take it all in.

The social content conversation service FriendFeed is hoping to alleviate some of those concerns today with a new feature: Rooms. Rooms are sequestered areas of FriendFeed where users can experience the service more intimately. Or, as FriendFeed co-founder Paul Buchheit more dryly puts it, “a room is like a mini-FriendFeed.”

The Rooms area will have its own tab along the top of FriendFeed between the “Friends” and “Me” tabs. Within the Rooms area you will be able to create multiple rooms for a variety of purposes. Rooms can be either set to public or private. You can even choose if you want information placed in rooms to show up in your main FriendFeed stream — this should definitely help reduce some noise if people start using Rooms in meaningful way.

The FriendFeed API has already been updated to support Rooms.

Naturally, Rooms already has a feedback room to talk about how to improve Rooms. If you can follow that and have suggestions for the FriendFeed team, find it here.

update 2: In the few short hours this feature has been live, I’ve been asked to join three rooms already, all of which already seem useful. 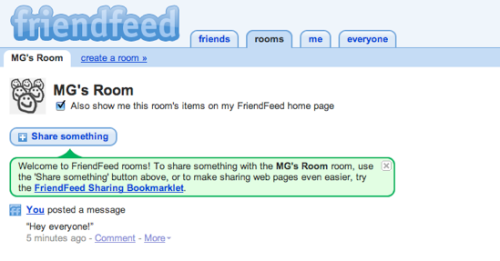