Google Sites now open to everyone — Now anyone can use Google Sites to create a group website. The service first launched a few months ago and let users integrate and collaborate on Google’s other offerings (written documents, spreadsheets and so on). At first, it was part of the company’s business offering, Google Apps, but it’s now available to the general public for free as a site creation tool. We’ve described Google Sites as another attempt to entice users to do their computing in Google’s “cloud” of Internet servers, and this general availability is a further step in that direction. For more details, see the video below.

Time Warner Cable leaves Time Warner — This is the latest move by new chief executive Jeff Bewkes to reinvigorate the media corporation, which will receive $9.25 billion as a result of the split. It’s not clear what, if anything, the separation means for Time Warner-owned AOL.

How to use social media to promote social change — We’ve written about Facebook applications that make money for charity, and now ReadWriteWeb looks at some other ways online services like Twitter and Digg can be used to make the world a better place, such as blogging to inspire people to donate to relief efforts in China. Hey, we can’t be greedy capitalists all the time. 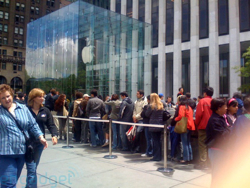 Inexplicable line forms outside Apple store — Engadget was at a loss to explain why a long line formed yesterday outside Apple’s flagship store in New York City. Apparently, some people had no idea why they were waiting, while others thought they were lining up for the 3G iPhone. It was kinda like “Waiting for Godot”, with Steve Jobs in the role of Godot.

Identity theft protection entrepreneur is a victim of identity theft — Todd Davis of LifeLock has been promoting his company by posting his social security number on the web and daring criminals to steal his identity. Well, someone did it — using Davis’ social security number, they convinced an online payday loan operation to give them $500. Now, LifeLock customers are suing Davis, alleging that he knew the service was flawed.

Visage Mobile sells subscriber management business to Convergys — Financial terms were not disclosed. San Francisco-based Visage has raised $93 million in venture funding since it was founded in 2001, and it says proceeds from the sale will go towards growing other parts of its business.