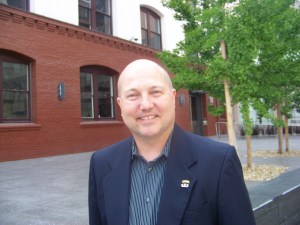 Cross-media content is the wave of the future, and John Antal shows what’s possible when you think beyond just one medium. He is a retired colonel who spent 30 years in the U.S. Army. He is also the chief of staff and military and historical director at Gearbox Software, the maker of the “Brothers in Arms” video games being published by UbiSoft. The latest edition is “Brothers in Arms: Hell’s Highway,” which Antal turned into both a historical novel and history book all at the same time he was helping create the game. I caught up with him while he was smoking a cigar at the recent UbiSoft video game showcase in San Francisco. The game and books debut in August.

JA: VB: Tell me about your work on the Brothers in Arms video game.
JA: [Gearbox Software has] been working on “Brothers in Arms: Hell’s Highway,” since 2005. I started earliest because I do the research. I go to the battlefield. Talk to the veterans. To create the game, we’ve really done our homework. I talked to probably 200 veterans and have thousands of great interviews from some of the other historians I’ve worked with. Our goal is to bring dramatic, interactive historical fiction to our audience. Everything in the game is real: the battles, the ground, the weapons.

VB: You served in the military yourself. What’s your background?
JA: Thirty years in the U.S. Army. Graduated from the U.S. Military Academy (West Point). Airborne Ranger. Served in combat units as a tank officer for 26 years. Served all over the world. Commanded from platoon to regiment. In my last job, I was the G3 (operations officer) of the III Armored Corps and so had about 65,000 guys I was responsible for. I’ve been in South Korea on the DMZ when we had tough times there. Been to Bosnia, Kuwait, and places like that. I did not fight in Operation Iraqi Freedom. I retired in 2003. But it looks like I may go to Afghanistan to give out games to the troops in September. That’s going to be fun. I still do a lot of interaction with the U.S. Army.

VB: What’s the core plot of Brothers in Arms?
JA: It’s a ten-day period during the life of a squad in World War II. When you fight in Brothers in Arms, you learn what that squad does. You don’t jump around and see all of World War II in one game. This is just Operation Market Garden. It’s Sept. 17, 1944 to Sept. 27, 1944.

VB: That battle was very dynamic, with paratroopers, tank combat, and lots of action. It seems like an ideal setting for a game.
JA: Yes. We started the first game with the 101st Airborne. Patton and his tanks were conquering so much ground that every paratrooper mission got canceled. It looked like the war would be over soon. But there was the big barrier on the Rhine. The allies tried to take it in a weak area in Holland. That was bad territory. It was flat, marshy, and the bridges interdict movement. If you have the bridges, you can drive. This operation launches airborne troops to seize the bridges. During this fight, all of the bridges are supposed to be taken the first day. But when someone is shooting at you, it takes a long time. Our story is about this squad. We wrote a novel, a history book and a game all about this episode.

VB: What was it like doing all three at once?
JA: For me? One hell of a year. I’m glad to be at this point smoking a cigar. Writing one book is hard. Writing two books is impossible. A game too? I hadn’t even started the book last year.

VB: Did you narrow down the history book from Cornelius Ryan’s “A Bridge Too Far”?
JA: Yes, this is just about the southern part of the battle. I have the photos of the southern portion, the eyewitness reports, the maps and the text in 160 pages. I think people who like history are going to enjoy it.

VB: That hasn’t been done before?
JA: There are books on Market Garden. But I have screen shots from the game that illustrate the battle in the history book and the novel. It’s a combination of media.

VB: How do you balance the respect for history and making a fun game?
JA: That’s not as hard as you might think. We treat the game, the history, and the novel very seriously. Veterans we show it to are impressed. They see movies and they say, “why can’t you show it right the same way in a game?” There is no bunny hopping (where your character constantly jumps as you press the space bar on your keyboard). You can’t take 30 shells. You can’t kill everybody yourself. In our authentic level, that’s the hardest and most realistic level. It’s a challenge.

VB: Did you have to make trade-offs in the name of fun?
JA: Obviously a game is not real life. We’re trying to render an emotion, a dramatic historical event, a powerful human experience on a two-dimensional screen. One thing we did was try to get players to use tactics. Find them, fix them with fire, flank them and finish them. To do that, we need trained squad leaders. To do that in the game, we create icons above the heads of observed enemy soldiers. When the enemies are suppressed with fire, you can see that the gray turns to red and it’s safe to move. You get a screen that turns red when you’re personally getting shot at. You know you have to get behind cover.

VB: How do the books and game relate to eachother?
JA: I have a high regard for people who play our games. A well-written novel is an art form in itself. We try to put you in the center of the battle from the American, German, British and Dutch perspectives. There are interesting moral dilemmas in it. The history book is the true history of the fight, using real after-action reports, maps, photos and interviews with veterans. You can play the game and open up the book and see what happened on the day you’re playing.

VB: Did you accidentally plan the cross media work?
JA: I’m the author of ten books. I used to be the editor of the Armchair General magazine and wrote 250 articles. I was a professional soldier and wrote in a lot of Army magazines. I went into the game thinking we could do a history book and a novel too. Think of how many other game companies can have a guy creating the game, writing a novel and a history book at the same time.

VB: Do you think franchises are the future for the game industry where you cross media?
JA: No, I think that intelligent companies like Gearbox Software will seize the high ground if they have the talent and the energy.

VB: Can you manage game developers like soldiers?
JA: No. Primarily because they don’t have the same discipline. But you lead people with the same ideas. It’s not push-ups and yelling and screaming. There is physical fitness in the military. If you’re not fit, you get killed. I rarely had to raise my voice in the military. Good leaders lead by example from the front. They care about their soldiers. The biggest dilemma is that to be a good leader, you must love your soldiers. But to win in combat, you have to risk their lives. Luckily, as game developers we don’t risk our lives. But we do risk wasting their time and talent if they’re not led properly. Leadership is at a premium in every industry. When I was 21, I was a leader of a tank platoon staring down the enemy at the East German border. I had to be serious and good to get promoted. To do things as a team takes training and leadership.

VB: Can you paint me one of the scenes from the point of view of the game, the novel and the history book?
JA: Imagine the air drop full of planes and parachutes by the thousands in the daylight. In the game and the novel, you land by glider because you’re part of the recon team. You have four guys in a jeep in the back of a glider, which is being towed from England. As you cross the Belgian border, you’re getting shot at by the German anti-aircraft guns. Once you got out, you had to really hustle.

VB: So does it give you a weird déjà vu to read and play this battle?
JA: You learn about today. The value of duty, honor, country, and selfless service. I’m in awe of these guys. This game is coming out at an interesting time. We put the last one out in 2005. We then had to learn the new technology. It’s like changing languages, like starting in Latin and moving on to greek. That’s why it took longer with this game.

If you liked this interview, please let us know through comments. And here are links to other recent interviews: