A startup called iPling has found a fun new approach to the crowded mobile social network market. Unlike the big mobile networks like Mocospace and the mobile version of Facebook, as well as other location-based social tools like Loopt, iPling doesn’t focus on helping you communicate with existing friends. Instead, it helps you make new connections based on shared background and interests.

As an example, co-founder Manuel Monroy says he could use iPling while on a business trip. If he doesn’t know anyone in the area but wants company to grab dinner or drinks, Monroy can create a profile with relevant tags like “Sigma Chi” (his fraternity) or “USC” (his alma mater). Then he can locate other iPling users in the area with similar tags, send them a message and if both of them are interested, they can set up a meeting. 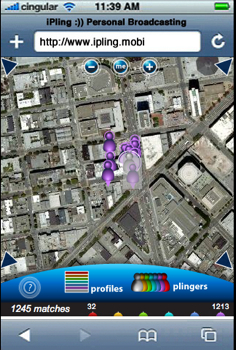 The key is that iPling hides all of your user information until you’re ready to share it; you can just send messages back and forth until you feel comfortable revealing your profile. The service doesn’t completely overcome some of the risks of meeting people online — after all, you’re still revealing personal information to someone you’ve never met — but this sounds like a more interesting use of location-based technology than, say, just finding out that one of your friends is nearby.

IPling is available in testing mode as an iPhone application. The San Francisco company is working to develop a native iPhone app using Apple’s software development kit, which it hopes to roll out in the next couple of months.

Monroy also has plans to launch a classified ad network in Mexico this summer, which would basically work as a mobile Craigslist. It’s an approach that makes sense, since many more people in Mexico access web services on mobile devices than on PCs. And although it may seem like a bit of a leap from iPling’s first application, Monroy says they’re tied together by the basic concept of connecting users who don’t know each other and allowing them to reveal more information when they’re ready.

The company is raising a small friends-and-family round to finance a push for more users. It investigated doing a full-fledged venture round, but Monroy says most investors were skeptical and told him, “Come back when you’ve got 25,000 or 30,000 users.” Right now, iPling has around 5,000. Monroy admits that’s relatively small, but he says the company is more focused on developing the product right now than on scooping up users. The friends-and-family round should help the startup get to that higher level, he says. IPling is targeting $1 million and has raised $225,000 so far.