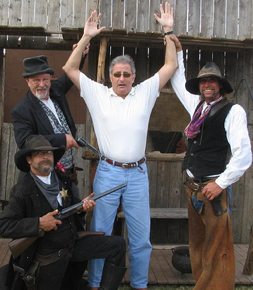 Online video site Revision3 was knocked offline over this past Memorial Day weekend by a denial of service attack. Normally, when you hear about such attacks, it’s a hacker or group of hackers attempting to take down a high-profile site to make some sort of statement. This case was a little bit different. It was started by an anti-piracy group.

The situation, as laid out by Revision3 chief executive Jim Louderback on the company’s blog details how the group MediaDefender — again, an anti-piracy group — took down a service that has nothing to do with piracy. It seems to be a case of vigilante justice gone wrong on the Internet.

Why would MediaDefender take down Revision3? Well, basically because it is clueless.

Revision3 uses BitTorrent as one means of distributing its content. Despite the negative connotations that have been placed upon the technology (and all peer-to-peer technology in general) because of piracy issues, it is a very useful and powerful medium for transferring data. Revision3 found it to be a highly effective means for transferring some of its hit shows including Diggnation, Tekzilla and The GigaOm Show to users.

It’s likely that because of this BitTorrent usage, Revision3 popped up on MediaDefender’s radar as a possible trouble area for piracy, even though none was going on. Revision3 had another problem as well: A backdoor opening that allowed outsiders to gain access to its servers.

Louderback believes that MediaDefender started abusing this exploit and when Revision3 found the backdoor and closed it last weekend, MediaDefender moved into attack mode and the denial of service attack started.

The FBI is now investigating the matter as denial of service attacks are illegal in the United States.

MediaDefender, which has been hired by several big media companies in the past to target pirates, isn’t denying being involved in the attack, but is denying it was a malicious attack. Even if that is the case, this is a troubling turn of events that could seemingly happen a lot more in the future to legitimate sites.

This is the problem with vigilante justice. Sometimes it targets real villains and gets results, but it exists outside the law and this area can get gray awfully quick. Louderback sums it up best:

Media Defender practices risky business, and needs to overhaul how it operates. Because in this country, as far as I know, we’re still innocent until proven guilty – not drawn, quartered and executed simply because someone thinks you’re an outlaw.